Few would argue that Rio de Janeiro is one of the world’s hottest destinations right now. Between its designation as the 2016 Summer Olympics host city and the fact that it will soon be the setting for a number of World Cup matches, Rio is at the top of many travellers’ lists.

But Brazil also has a number of other beautiful cities to offer. Whether you’re travelling within Brazil for the World Cup or want to fight the crowds flocking to the Cidade Maravilhosa, add these six Brazilian cities to your must-visit list.

Set in the state of Bahia on a stretch of sparkling coastline, Salvador is famous for its beautiful, sandy beaches. The city was Brazil’s first capital, and residual colonial architecture can be admired at every turn.

Pack your bikini and hit the Porto da Barra beach along one of the world’s most beautiful bays. If it’s partying that you’re looking for, then head to Salvador in February, when the city organises the biggest street carnival in the world: over two million people take part in the celebrations.

Built on an island filled with picturesque beaches and ports, Vitória is home to magnificent churches and colonial buildings that show off Brazil’s rich history.

Try scuba diving in Vitória’s tropical archipelago and visit the Curva da Jurema beach, where the evenings come to life with jazz, rock and samba music.

Beautiful parks with mangrove forests and abundant wildlife are also worth exploring. And if you’re looking for local culinary delights, then taste the original moqueca capixaba, a stew made with fresh seafood and coconut milk.

Situated in the Serra do Espinhaço Mountains, Ouro Preto (Portuguese for ‘Black Gold’) has been named a UNESCO World Heritage site thanks to its well-preserved Baroque architecture.

Dating back to the late 17th century, the city offers a historical retreat from Rio’s hustle and bustle. Make sure to visit its gold mines and colonial buildings for a glimpse into the city’s unique history.

Ouro Preto will not be hosting any World Cup matches, making it a great choice for those eager to explore a more secluded side to Brazil.

Translating to ‘Christmas’ in Portuguese, Natal is home to some of the best beaches, bars, clubs and restaurants in the country. Considered Brazil’s safest city, it’s located right on the country’s northeastern coast.

Head to Ponta Negra, a beach promenade on the city’s edge, that hosts live music events, bars and eateries. Bring your dancing shoes and experience a night of forró, a popular musical style that originated in this part of the country.

Bordering Argentina and Paraguay, this city is famous for its natural wonders, including the stunning Iguaçu Falls. In addition to the waterfalls, which are accessible via various nature trails, Foz do Iguaçu is home to the world’s largest hydroelectric power station, the Itaipu Dam, which can be visited by tourists.

Also worth seeing is the impressive ecological sanctuary, Parque das Aves, which is host to more than 800 tropical bird species including flamingos and toucans.

Absent of any World Cup matches, Foz do Iguaçu is a must-visit for anyone looking to experience Brazil’s natural wonders.

No list would be complete without South America’s largest city and Brazil’s most thriving metropolis. Located in the southeastern part of the country, São Paulo is a great starting point for anyone looking to experience Brazil’s heart.

Skyscrapers mingle with traditional architecture to create an eclectic blend of culture and modernity. With great museums, a major urban park (Ibirapuera Park), more than 12,000 restaurants and a melting pot population, São Paulo is a buzzing city that never sleeps. São Paulo will be hosting several World Cup matches, including one of the semi-finals.

6 cities in Brazil that are not Rio de Janeiro (NOT Rio) was last modified: June 26th, 2019 by Claire Bullen 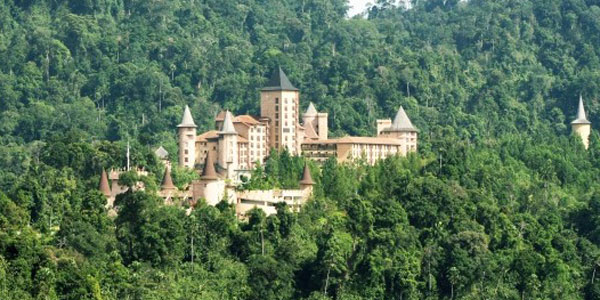