Stopovers can be a real drag but not if you’re lucky enough to be ‘stuck’ in Amsterdam. A common stopover point, especially between the USA and many European cities, Schiphol Airport is only twenty minutes from the centre of Amsterdam. A few hours between flights is more than long enough to get a taste of what the city has to offer so we have put a quick guide together of 8 things to do in Amsterdam in 8 hours, just be careful it might leave you wanting much more…

Search for flights to Amsterdam

The 1st Hour: From Touch-Down to the City

Welcome to Schiphol Airport, the main international airport in the Netherlands, 5.6 miles (9km) from Amsterdam and 40 minutes by shuttle bus or taxi.

But the best thing about Schiphol Airport? Schiphol Station is located directly below the terminal and the train to Station Amsterdam Centraal only takes 15 to 20 minutes. Single-use chip cards can be purchased from ticket machines and service desks (single €4.10 + €1 surcharge for disposable tickets) close to the big red and white cube (you can’t miss it) right in front of the arrivals hall. Trains run regularly between 6am and 1am, and there is still, at least one per hour outside of these times. Trains for the return journey to the airport run on a similar schedule.

If you want to freshen up before taking on the city, Yotel located in Lounge 2 has shower-rooms available for €15 an hour with everything included, and why not leave any luggage you won’t need for the next 8-hours in the baggage lockers located throughout the terminal. 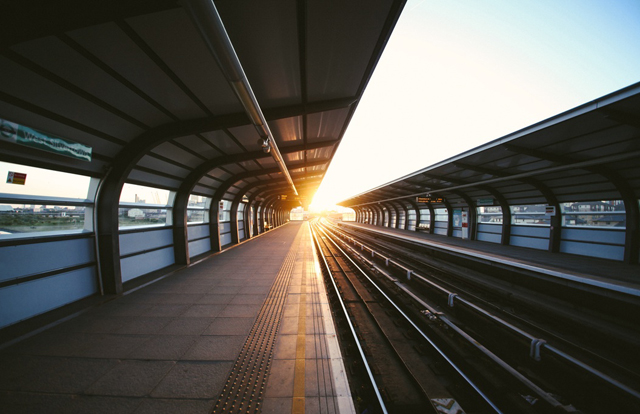 The 2nd Hour: Hire A Bike

Two wheels and pedal power are sacred in Amsterdam and cycling is by far the best way to get around the city, especially with only 8-hours to see as much as possible. The city’s flat landscape is awash with bike paths that cut along the elegant canal scenery. There are bike rental shops throughout the city. For a more authentic experience choose Black Bikes, they offer classic Dutch bikes (€6 for 3 hours) with no garish signage attached making it less likely the locals will immediately label you “just another tourist.” Their most convenient outlet is in the Red Light District just a 9-minute walk from Centraal Station.

The locals do have a few pet gripes when it comes to tourists on bikes. Don’t stop in the middle of a bike path to take out your map or phone and always check behind you to make sure you’re not cutting anyone off when pulling over to take in the scenery. For more tips on cycling in Amsterdam have a look at this handy guide.

A great destination to take your newly hired steed for a spin is the beautiful and expansive Vondel Park a 10-minute ride from Black Bikes. And what’s best, you can see all major attractions from the comfort of your bike seat. Oh and remember to lock your bike up securely, something like 50 000 ‘go missing’ in Amsterdam each year. 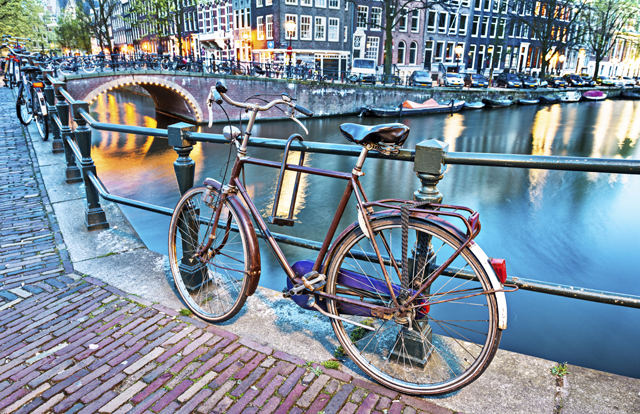 The 3rd Hour: Find A Bar With A View

After all that pedalling you’re sure to be in the mood for a beer, wine or maybe two and a snack while you’re at it. Any one of the bars with street side tables in and around Dam Square are perfect for taking in the comings and goings of Amsterdam; the pretty and handsome out on promenade, streams of passing bicycles, and the distorted tourists looking at the world as though for the first time, brightly coloured sunglasses disguising their red-eyed delirium.

For something a little more alternative check out Sound Garden (Open Mon-Thurs 1pm-1am, Fri 1pm-3am, Sat 3pm-3am, Sun 3pm-1am) a grunge bar with a friendly vibe and terrace overlooking a canal out the back. 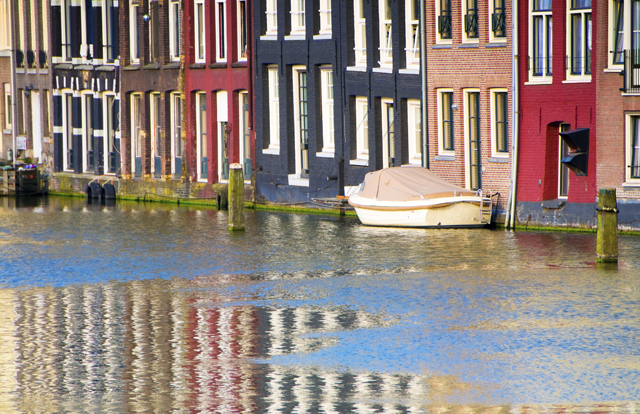 The 4th Hour: Check-Out A Museum

Amsterdam is home to a plethora of world-famous museums but with only 8-hours you will have to choose carefully. Rijksmuseum is monumental and the Van Gogh Museum is probably a better option with your limited time, in an hour (maybe a little longer depending on how many minutes you saved at Febo) you can at least get an impression for a few of his most masterful pieces. Just make sure to book your tickets online (smart phone tickets are accepted) to avoid wasting your precious time in the long queue. Other possibilities include the modern art of the Stedelijk Museum or the Anne Frank House.

For the more ‘progressive’ visitor there is the Sex Museum, a historical collection of erotica, art and all things phallic. It won’t take up as much of your time as the other larger museums, there is rarely a line, and only €4 entry… do you need any more excuses? 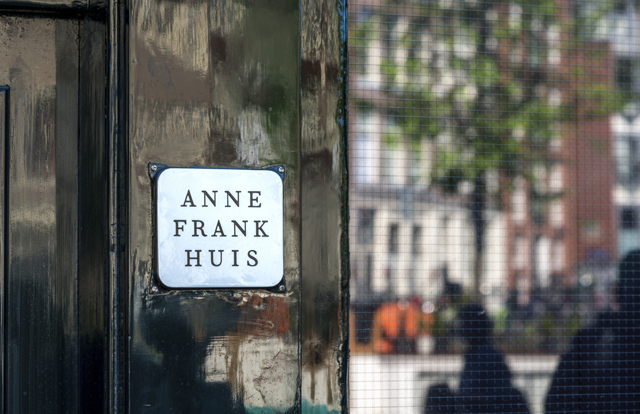 Any trip to Amsterdam would be incomplete without a visit to one of the city’s infamous coffee shops just to take in the scene, at the very least. Locals and foreigners alike swarm and slump in these smoky (tobacco free) retreats, each high in their own knowing red-eyed daze. With close to 200 coffee shops scattered all over the city there is a huge variety available and everyone has their favourite.  De Dampkring has a surreal décor and looks like something out of Alice in Wonderland, it is a reliable and popular option in the centre of town. Just don’t linger too long because there is much more to see, and remember everything might take you a little longer now… 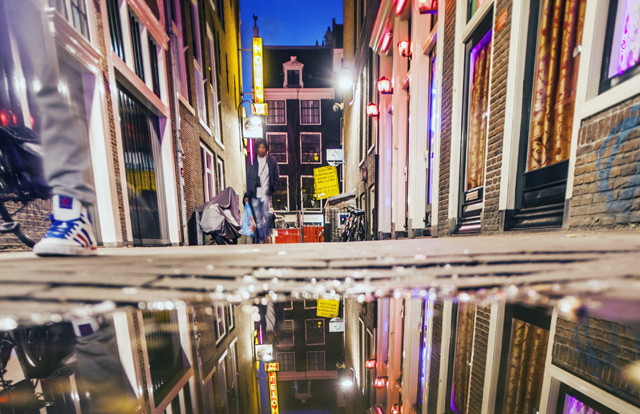 The 6th Hour: Take A Cruise on The Canals

Getting afloat on Amsterdam’s canals is another unmissable experience and aside from cycling the best way to take in the city’s sights. On an hour long cruise you will explore the central canal ring and get a feeling for the city’s long and rich aquatic history. There are also a variety of other types of canal cruises to choose from including romantic candle-lit tours, hop-on-hop-off services and child-friendly adventures for the whole family.

Canal offer comfortable glass topped boats that depart frequently between 9am and 10pm from Gray Line pier 5 at the beginning of the Damrak (the main avenue in central Amsterdam) 5-minutes from Centraal Station. Hour long cruises start at €14.50 when booked online. 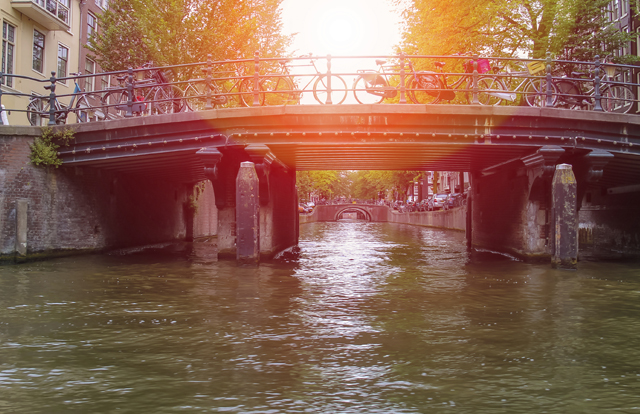 The Wallen, or the Rosse Buurt to locals is the oldest part of Amsterdam and of course the most well-known. Even if you have heard what to expect seeing this district in action for yourself can still be a shock. Sex shops, peep shows, brothels, and prostitutes in red-lit windows. It is well worth a stroll through even by day, but it’s at night that the place really comes to life crawling with crowds of sightseers and those seeking something more.

Still there is more on offer than just vice. Within the glow of the flashy neon signs there are boutique shops, restaurants, and some of the nicest canals in the city too. 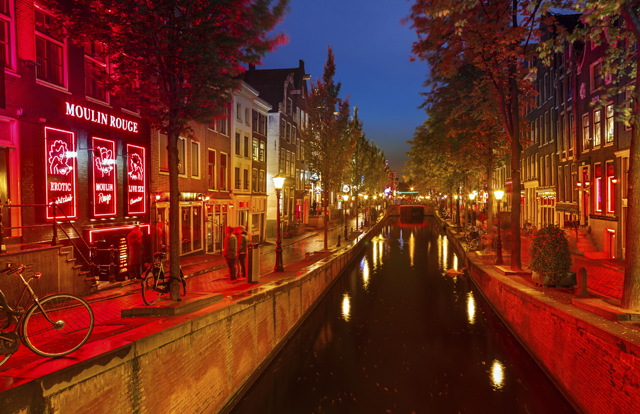 The 8th Hour: Maybe You’re in the Mood For Something to Eat Now?

Amsterdam is home to plenty of fine restaurants but for something on the run nothing could be easier than an automated snack at Febo. The culmination of the fast food movement, mini-burgers, fries and more fresh out of a vending machine and actually a lot more palatable than it sounds. With more than 20 outlets all over the city and two within a stone’s throw of Centraal Station open until 2am, you’re sure to pass one just when you need it most.

p.s Give yourself plenty of time to get back out to the airport. Maybe even check your pockets for anything that might have crept in there at the coffee-shop before taking to the international skies once more…

How to see Amsterdam on an 8 hour stopover  was last modified: June 26th, 2019 by Nicolaus Zietsch