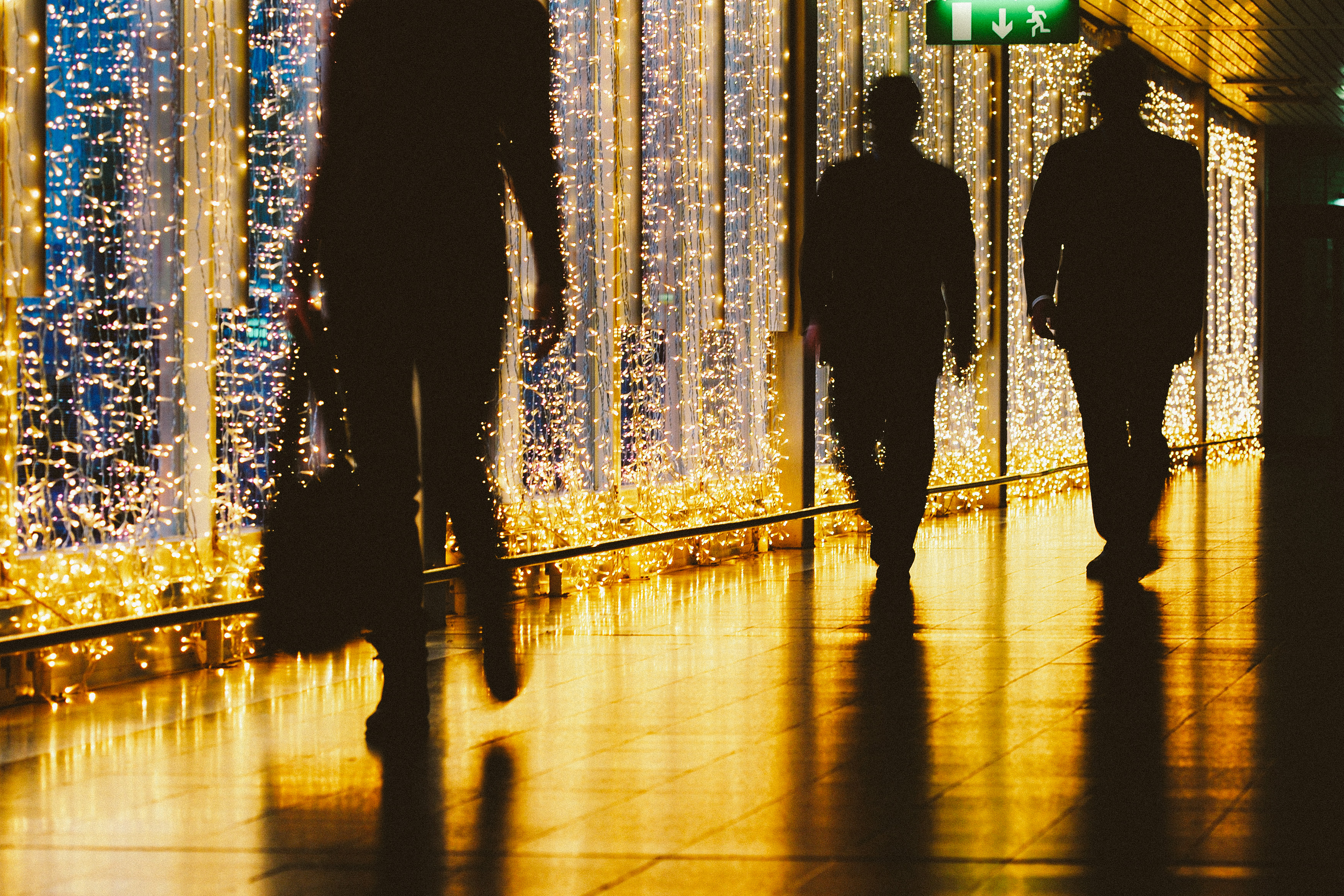 It’s beginning to look a lot like Christmas, everywhere you fly.

Airports around the world are decking their terminals with Christmas decorations, illuminated trees and whimsical treats, helping us frequent travellers to feel a bit more inclined to book a flight this winter. From ice-skating rinks to carollers and Christmas trees, these are the best decked-out airports from around the world. 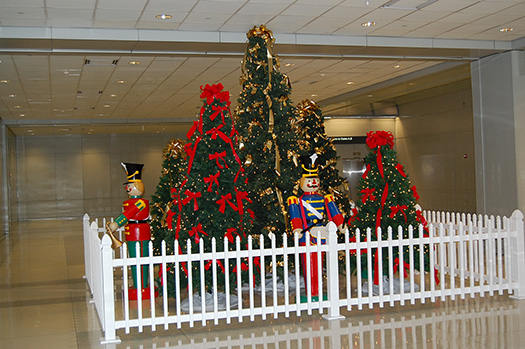 The season is in full swing at Washington-Dulles International Airport. Arriving passengers are greeted by holiday trees decorated by local school children, while wreaths and garlands dot the whole airport. Anyone taking the Aerotrain can admire the over-sized holiday ornaments and decorations. Plus, look out for Santa and Mrs Claus, who will be greeting passengers throughout the season. Music lovers are in luck too, as the airport takes “deck the halls” to the next level with carollers, classical music performances and high school bands, while shoppers who indulge in holiday shopping get a battery pack/charger as a gift with the purchase of $100 or more. 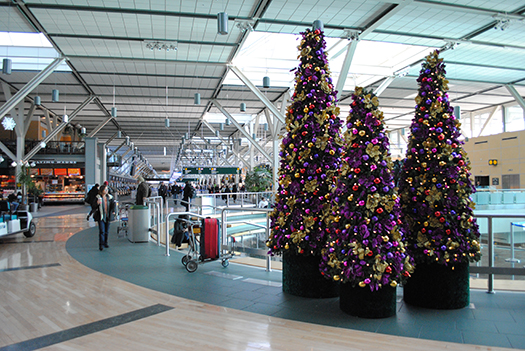 The sounds of festive music entertain arriving and departing passengers at Vancouver International Airport. Free live music and entertainment are set against a backdrop of seasonal installations and photo opportunities. Look for performances both pre- and post-security between 11 a.m. to 3 p.m. from December 16th. Festive perks for passengers in Vancouver include free gift-wrapping for all purchases post-security – which is pretty handy if you are doing a last minute shopping dash! 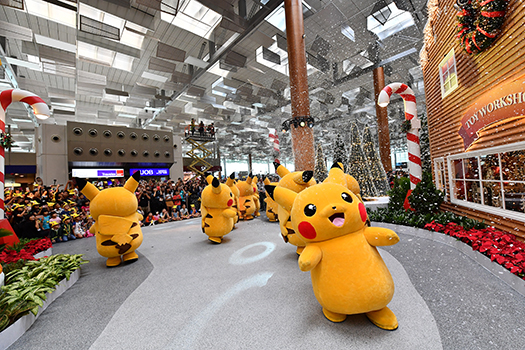 Changi Airport’s theme this year is “Pokémon at Changi,” capitalising on the popularity of Pokemon Go. The Singapore airport will be turned into a lair for the pocket monsters through to 11th February 2017. The holidays kicked off in mid-November with a Pikachu Parade featuring 10 of the bright yellow characters. The holiday set-up in Terminal 3’s departure hall includes a giant seven-foot Pikachu and a Gingerbread House that is home to Santa’s Workshop and Mrs Claus’ Confectionary, which is filled with toys and treats. Pikachu visits the Gingerbread House on weekends until 1st January. More Pokémons are in the Terminal 3 departure hall, while three life-size Snorlaxes lounge at the Snorlax Garden for photo ops. Pokémon trainers and visitors can embark on a Poké Trail for a chance to win exclusive Pokemon merchandise by hunting for the 26 Pokémon waiting to surprise them at various locations across Changi Airport. At the Terminal 2 and Terminal 3 departure halls, visitors can find virtual face painting kiosks where they can see themselves turned into Pikachu. Pokémon fans can buy a full set of nine limited-edition Pokémon plush toys including Pikachu, Eevee, Bulbasaur, Charmander and Squirtle and three new characters from Nintendo’s new Sun and Moon series – Rowlet, Litten and Popplio – as well as a Poké Ball. 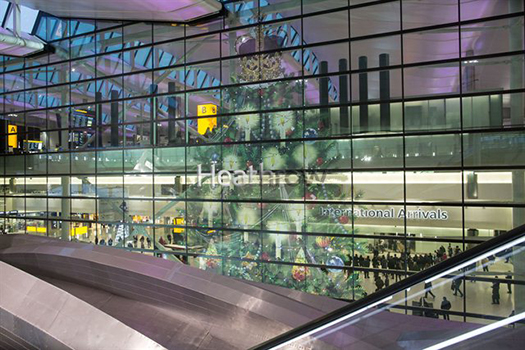 At Heathrow Airport, passengers are treated to performances by a string quartet and carollers. Don’t miss Santa Claus handing out chocolates. Children can participate in workshops to make Christmas candles and tree decorations, and they can eat for free at Heathrow’s restaurants during the festive season. Travellers departing from Heathrow and shopping along the way can receive complimentary gift-wrapping too. Emotional reunions are aplenty in the arrivals area, so it’s no wonder parts of the holiday film “Love Actually” were filmed there. 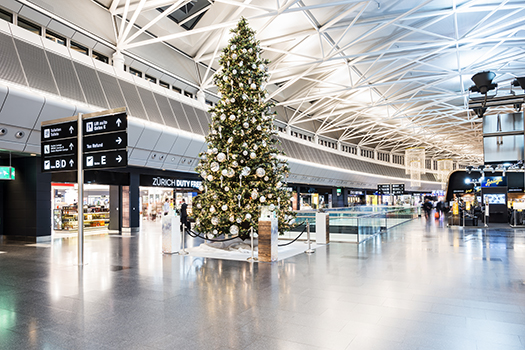 Zurich Airport is aglow for the holidays, literally. The airport is decked with 500,000 lights inside and out. The Airport Centre on the landside is draped with huge chandeliers and chains of lights. Post-security, there is a 26-foot tree, decked with Swarovski ornaments and festive sleighs, which is the perfect place for selfies. Near the gates, there’s another Christmas tree decorated by Tiffany & Co., whilst Swarovski, Fogal and Lindt offer their products in specially-built and festively decorated pop-up stores. Holiday events include an Advent Brunch, fondue, raclette and wine tastings at airport restaurants. Children can decorate gingerbread and bake cookies in the Airport Bakery, and Santa Claus is making visits too. Passengers can enter to win prizes like shopping vouchers and a European flight with Germania. The grand prize, a pair of long-haul tickets in SWISS Business Class, will be drawn on 24th December and to top it all off, passengers get free chocolate every weekend in December. 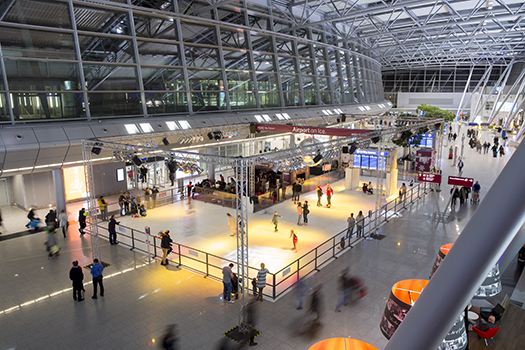 Fairy lights, decorated fir trees, artificial snow and a huge Christmas tree greet passengers in the check-in hall at Düsseldorf Airport. Passengers can glide along the artificial ice rink for free on the first three weekends in December and on New Year’s Eve and New Year’s Day from 11 a.m. to 6 p.m. The airport hosts the Airxperience – a special event with entertainment, sports and television stars – on the first Sunday of the month. Shoppers can also pick up holiday gifts at 30 food and fashion shops and save up to 30 per cent at selected retail outlets during December. 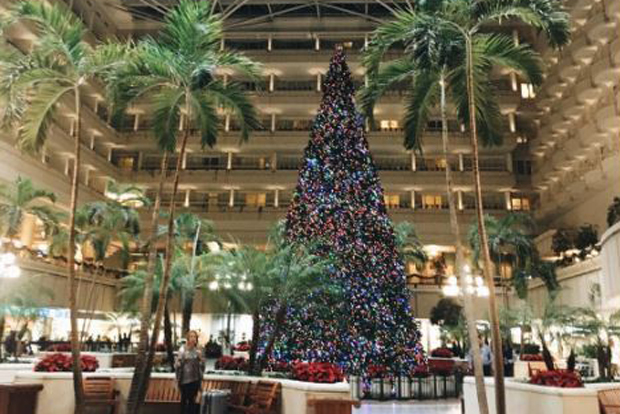 The holidays at Orlando International Airport may not be quite what they are at nearby Walt Disney World, but they’re still an impressive addition to the festive season for travellers. A massive tree with blue, red, green and yellow LED lights graces the atrium of terminal B. It’s easily one of the largest trees seen in an airport terminal. 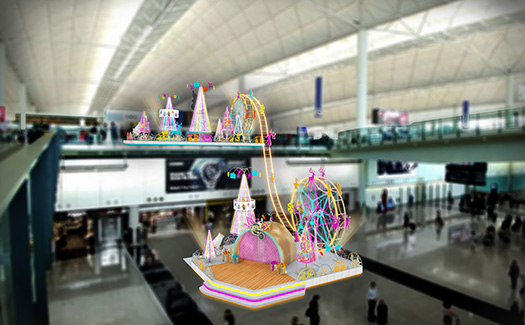 Hong Kong International Airport continues its tradition of decking the halls with holiday cheer. This year, neon Christmas decorations include a 26-foot-tall Ferris wheel with an interactive game, where passengers can take photos of the Ferris wheel, decorate it with digital stickers and download the photo or post it to an LED wall. Christmas carolling, a cappella performances, magic shows and meet-and-greets with Santa Claus round out the festivities. 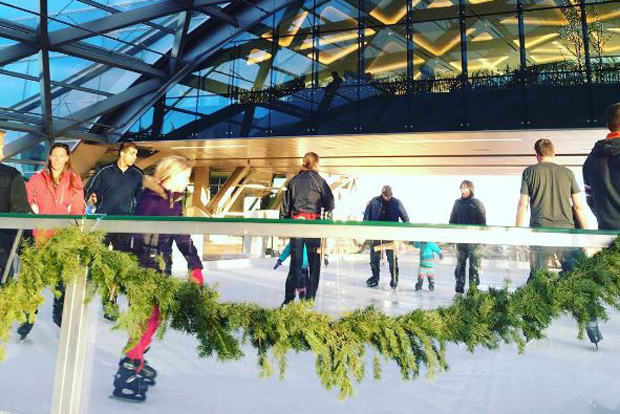 Denver International Airport is kicking off its holiday season with the addition of an ice skating rink on the airport’s open-air plaza. Skating is free and carollers and costumed characters will make surprise appearances. In addition to this winter wonderland, the airport will also have an outdoor holiday market from 9th-11th December, featuring local crafts and food items. Have some time on your hands before your flight on 16th December? Starting at 4 p.m. on the DEN Plaza, catch a holiday “Film on the Fly” with a screening of “National Lampoon’s Christmas Vacation” and an ugly Christmas jumper contest.

Heading to the airport this Christmas? Here’s what to expect…

CheapflightsQuirky TravelFestive flying: the best decorated airports this Christmas
We use technical, analytical and marketing cookies to help you with things like logging in and picking up your search where you left off.