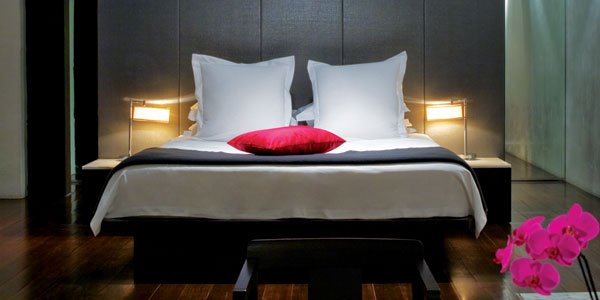 Flying to Sydney and finding a place to stay once you’re there can be tricky, so be sure to plan ahead with our guide to the best places to hunker down in the city. As one of the world’s largest cities, geographically it can be a challenge to work out where best to book. Aside from Darling Harbour, hotel heaven can be found in Woollahra and Potts Point; other more residential areas, such as the Eastern Suburbs, Inner West and the North Shore, are also welcoming visitors into the fold with an ever-increasing number of places to stay.

A maze of cobbled streets and heritage buildings, the area around Harbour Bridge – ‘The Rocks’ — is loved as much by locals as it is tourists. Stay at the Establishment for easy access to the CBD and less money spent on taxis. Whilst the penthouses at this stylish boutique hotel may require the budget of a banker, 31 standard rooms come with equally indulgent king-size beds and for far fewer Australian dollars. All the rooms come equipped with a host of high-tech gadgets, the highlight of which is an iPad packed with all the apps you could possibly need at the touch of a fingertip. Two restaurants (one offering Japanese fare, and the other contemporary and seasonal cuisine), a moody Moroccan-styled cocktail bar and a high-octane nightclub seal the deal to make this one of the hippest hotels around. A splash-the-cash option for honeymooners and other hedonists.

Manly’s reputation as a place for surfer dude brawls still holds strong, but in past years this beach neighbourhood has cleaned up its act. Just a five-minute hop, skip and a taxi-ride away is Quarantine Station, perfect for culture vultures and ghoulish types; this area was once used as quarantine for immigrants in an attempt to prevent the spread of smallpox. Sadly, many of them never made it out of quarantine, and these parts have become renowned for paranormal goings-on; ghost tours run on a nightly basis for those in search of Sydneysider spectres. There are 72 rooms in total – though nothing too fancy due to strict Australian heritage laws, some even without bathrooms – and the Engine Room bar and Boilerhouse restaurant for on-site drinks ‘n’ eats. The raison d’être, though, is the view of the dazzling harbour across the water: a priceless panorama if ever there was one.

Sydney’s version of Primrose Hill, Woollahra is wealthy, leafy and beautifully manicured. The shopping hub of Paddington – clustered around Glenmore Road and Oxford Street — is also round the corner. Set inside a Victorian mansion that used to be home to Dr Frederick Harrison Quaife, founding father of the British Medical Association and son of philosopher Barzillai Quaife, Hughenden’s 36 rooms and eight suites certainly have an intellectual air. Expect grandiose flourishes without the grandiose prices: high tea, a live pianist and homey Victorian furnishings. If the somewhat fusty in-house eateries don’t appeal, nearby Queen Street and Oxford Street both have a host of great restaurants and pubs to suit any taste and budget.

Simple and unfussy, the Vulcan Hotel is a convenient spot to catch forty winks close to the harbour. It’s hardly surprising that in 2008 it was recognised as being the ‘Best Boutique Hotel in Sydney’; the sleek, streamlined design of the rooms, incredible location and reasonable room rates make it a sure-fire winner. All 46 rooms are en-suite and have free WiFi; the superior double is the best value for money, kitted out with a queen-size bed, mini-bar fridge and all-important air-conditioning for doing battle with the Sydney summer. And downstairs the hotel just keeps on giving with the Hummingbrid Restaurant for hearty, wholesome breakfasts, a courtyard for lounging in (crisp Hunter Valley white in-hand) and business facilities for those who just can’t switch off. Wholly deserving of its award – and keeping hold of it effortlessly.

Characterised by its Art Deco style, the surprisingly subdued area of Potts Point provides welcome respite from the hustle and bustle of Sydney’s busier neighbourhoods despite being just blocks from buzzing Kings Cross and its clusters of nightclubs. Diamant – on Kings Cross Road — offers plenty of bang for your buck with standard rooms that are sleek, simple and pared-back. All 77 rooms have a 42-inch plasma and iPod docking for impressive in-room entertainment; if you venture downstairs there’s a classy wine bar in the form of Time to Vino run by one of the city’s best sommeliers, Clint Hillery. The décor is kept minimalist and stark, with the kind of aesthetic that wouldn’t look out of place on the glossy pages of a design mag; party-goers who like to a good night’s sleep after dancing ‘til dawn love this place.

CheapflightsCity breaksPlaces to stay in Sydney
We use technical, analytical and marketing cookies to help you with things like logging in and picking up your search where you left off.