Travelling, drinking beer and the possibility of live Oom-pah music – what could be better? If you’re off to see the world this autumn, you like beer and you want to pretend you’re at Oktoberfest, then pack your stein and read on.

Airports around the world are pouring some frothy brews this beer-drinking season, and we’ve found some of the best spots to sit back and grab a cold one before your flight. If you’re lucky, you might even catch an Oktoberfest celebration, so you can get the full experience even if you’re not heading to Germany.

Maybe you’re leaving Munich post-Oktoberfest, or perhaps you want to start the celebration early. The Munich Airport Beer Garden is the closest you’ll get in an airport to the feeling (and drinking) of Oktoberfest, with an actual maypole onsite. As they say in Germany, “Prost!”

Search for flights to Munich

Location: Between terminal 1 and 2
Drink this: Give the Jetstream a try. It’s an affordable pilsner with just the right amount of hops.

If you find yourself in the land Down Under, make a pit stop at Coopers Ale House, which received the International Airport Bar of the Year at the 2014 World FAB Awards. The shabby chic airport pub designed out of recycled timber offers original Australian beers in a variety of styles.

Search for flights to Sydney

Location: T1
Drink this: Order a Best Extra Stout for rich flavor and a punchy finish.

At Cigar City Brewing — one of the first airport brewpubs in the US — you can (and should) relax with a beer and eat Tampa-style Cuban cuisine. The airport will also be celebrating Oktoberfest with traditional German music at its Friday Flight event on Sept. 23, so make sure you swing by the main terminal for a quick twirl before your flight.

Search for flights to Tampa

Location: Airside C Terminal
Drink this: Sip on the Jai Alai Indian Pale Ale, which was originally a style brewed for British troops.

If you’ve got some extra time in the Frankfurt Airport, you’re in luck. There will be Oktoberfest celebrations happening right in the airport for the next three weeks. Enjoy live music, drink up at a traditional beer tent and snack on giant soft pretzels — all before takeoff. Doesn’t get much better (or more festive) than that.

Search for flights to Frankfurt

Location: Pier Z, Terminal 2
Drink this: Enjoy a litre of fresh beer from the tapped keg right in the terminal.

California is one of the top craft brew hot spots, and Cali-based Stone Brewing is producing some of the most delicious and top-rated beverages on the map. Enjoy the farm-to-table food menu and a variety of beer selections at its airport location.

Search for flights to San Diego

Location: Terminal 2
Drink this: Try out the Stone IPA, the definition of a reliable Indian Pale Ale with a crisp hoppy finish. 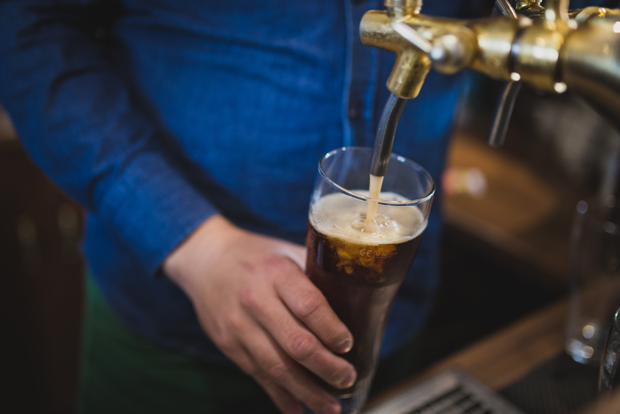 Loksins at Iceland’s Keflavík International Airport not only serves beers from one of Iceland’s leading craft breweries, Borg Brugghús, but also other island-native beers such as Brennivin, also known as the original spirit of Iceland.

Search for flights to Iceland

Location: In the main building terminal, next to Segafredo Zanetti cafe.
Drink this: Borg Brugghús

The Denver airport has its share of tap houses where you can while away the hours (and drink) before your flight. If you want the true Colorado beer experience, make your way to the New Belgium Hub, which boasts artfully crafted beers designed for drinkability. New Belgium keeps winning awards for its micro-brews, so you should probably find out why. For research purposes, of course. The Denver airport has also been known to throw their own Oktoberfest shenanigans (for the past two years a “Beer Flights” beer garden has popped up to celebrate the season), so be on the lookout when wandering the main terminal in case they kick off celebrations again this year.

Search for flights to Denver

Location: B Gates
Drink this: Sip on the 1554 Enlightened Black Ale, a unique beer inspired by centuries-old Belgian style.

Canada has increasingly embraced its craft-brewed culture and, if you are passing through Toronto’s Pearson International Airport, you can sample some of the results at Mill Street Brewery. Although the brewery has grown to include locations all over Canada, including this airport brewpub, it started in 2002 as a local operation Toronto’s Distillery District.

Search for flights to Toronto

Location: Terminal One near gate D20.
Drink this: Try the seasonal German-style Marzen brew, a malty lager aptly named Oktoberfest, and forget the fact that you’re an ocean away from the real event.

Rogue Ales is an Oregon brewery dedicated to working with the best ingredients, whether that’s hops, malts, yeast or water. It’s got a meeting hall at the Portland Airport with an array of beers to choose from. Be sure to grab a 22-ounce pre-flight brew or pick up a growler to take with you to your destination.

Search for flights to Portland

Tokyo is known as a city that never sleeps and this 24-hour beer club fits right in. BEER Club Verre Tokyo serves light and delicious beers at all hours of the day and night while you wait to board.

Search for flights to Tokyo