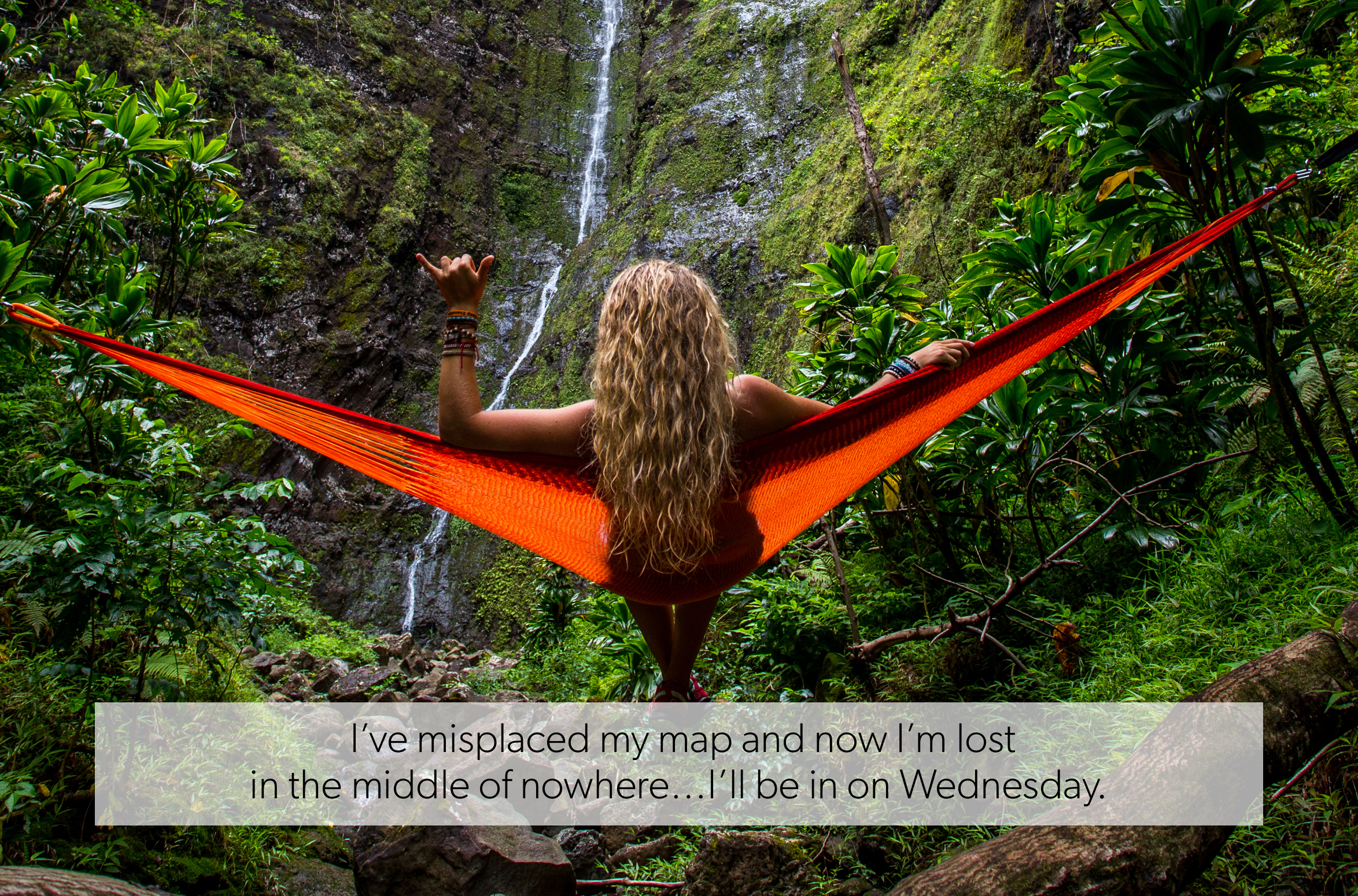 So, the holiday gods have smiled upon you and brought forth a trip for your weekend. Whether it’s a B&B stay in Scotland, a quick jaunt to Amsterdam or a 48-hour music festival in Budapest, by Sunday evening, you’re probably wishing that you had more time to soak up the sun or slip into recovery mode (neither of which can be done from the office). If you have your heart set on extending your weekend trip, here are 41 excuses that might come in handy. And remember, if you accidently-on-purpose miss your flight home, you can use the Cheapflights website or app to compare your options and score the best-value deal on another one. Maybe next week. Or the week after that.

1. Your paddle boat got caught in some sort of Bermuda Triangle-like scenario and you’re stranded in the middle of… not nowhere, but certainly a lake. You’re probably going to need a few days to get to shore.

2. Your dog (whose existence you have never mentioned until now) ate your passport. Who knows how long you could be prevented from returning home – emergency travel documents take days to get issued.

3. Kruger National Park in South Africa is beautiful this time of year, but now you’re being hunted by a pack of hyenas, and you’re not sure whether you’ll make it. Ever.

4. Turns out, you’re allergic to mosquitoes, and Goa is ridden with mosquitoes.

5. You’re sunburnt and there is an an aloe shortage. You totally underestimated the Irish sun. Clothing is just not an option for you right now, and casual Friday is still a week away.

6. You shouted out loud that you didn’t like Calvin Harris at V Festival. The mob has turned against you. There is no way you can shake this off.

7. You’re stuck in a hotel lift. In one of those fancy Dubai hotels.

9. Apparently, “The Walking Dead” is based on a true story… and now you’re trying to escape some zombie apocalypse, and you didn’t check a bag, so you’re without sturdy leather boots or your crossbow in a zombie-packed New York. You’re honestly jealous of everyone safely back at the office.

10. You were travelling with your pregnant friend and now you’re experiencing a phantom pregnancy. So you’re going to need to take some phantom maternity leave.

11. You thought that hitchhiking all the way from Edinburgh would get you home. It didn’t. You should have booked a cheap flight instead.

12. You lost your friend Darren…er…Derek at the airport and you can’t come back until you find him – you’ll most likely miss the flight. Dammit Danny!

14. The queue to get out of Glasto actually takes an extra 48 hours.

15. There is a terrible storm brewing over the Caribbean. For some reason, they aren’t reporting it on the news. Weird, right?

16. Your boarding pass is on your phone and your battery has died and you left your charger at home.

17. You peed in public in the middle of the night in Bangkok and got arrested.

18. You fell out of your hammock, did your back in and are now bed-bound.

19. You got on the wrong flight and now you’re lost in the wrong city. Why is there a place called East London in South Africa? I thought they meant Stansted – totally thought that was East London.

20. You used some expired sunscreen and now you have an all-over-body rash.

21. Somehow, without being related, you’re the identical twin of a princess of Genovia. It would be rude to leave the celebration they’re holding for you. Erm, yeah… Genovia is a real place.

22. Armageddon!! Got locked in at this quaint cottage in the middle of Cotswolds. Seriously, your luck is SO bad.

23. You accidently got married in Vegas, and are now tied up in messy divorce proceedings.

24. You’ve found yourself in the danger zone. No explanation needed, right?

25. You’re suffering from PHG (post-holiday grief). You are going to need a few personal days to heal.

26. You’ve had a selfie-inflicted accident. A serious wrist sprain was involved. Don’t trust selfie sticks. No Instagram filter is safe.

27. You’re experiencing acute “change in weather disease”. NHS’ self-help guide says it could be pretty dangerous and is highly contagious.

29. Your plane got cancelled. You will try your hardest to be on the next available plane home.

30. You didn’t see the warning signs, drank water out of a tap and contracted a serious stomach bug.

31. The hotel cleaner stole all of your belongings… except for your phone. Thank goodness for those little miracles.

32. Your luggage has been lost and now you have nothing to wear to the office. Yes, I have no other clothes.

33. You’ve developed a rare allergy to the indoors. Should be better after a few days of Claritin.

34. Your dog has become lost cargo. Ok, not YOUR dog… but you’re still pretty torn up about it and need to take a personal day.

35. You got engaged! Yes, it is crazy how just three weeks ago you were complaining about being single. When you know, you know.

36. You’ve been dumped. Yes, it is crazy that just three weeks ago you were complaining about being single. That’s what you get for taking a chance on love (and Tinder).

37. You have to catch a later flight. Apparently your “crying” was disturbing the other flyers and you were asked to leave.

38. The ferry isn’t working. Turns out, there is too much water right now.

39. You misplaced your map and now you’re lost. Sadly, no, the map on your iPhone is not working either…

40. You tour guide passed on… to another location and you are just too torn up about it.

Now you’ve got your excuses sorted, it’s time to get your next weekend trip booked in. Head over to the Cheapflights website, where you can compare flight prices from thousands of airlines and online travel agents.

CheapflightsQuirky Travel41 excuses to tell your boss to extend your weekend away
We use technical, analytical and marketing cookies to help you with things like logging in and picking up your search where you left off.