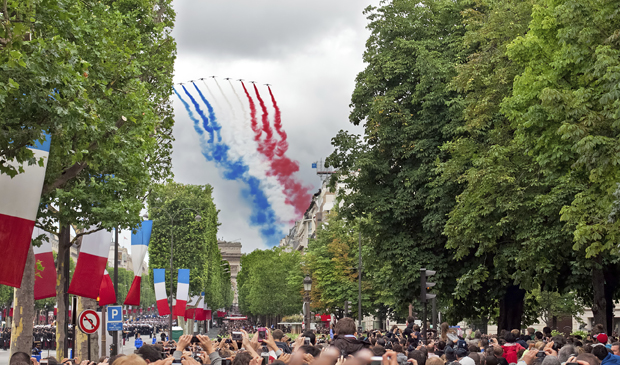 As one of the Europe’s biggest cities, it’s no surprise that Paris hosts a full calendar of events. From sporting events that stop the world to petite food and drink celebrations that will tempt taste buds with French cuisine, these are the festivals worth planning your holiday around.

As you all know yesterday we celebrated the revolution (Bastille) day (14th of July) and every year there is a show of lights, music and fire works at the Eiffel Tower. I took some photos last night but no one is as good as this one of my bro Antoine @toinou1375 follow him and give him some love

If there’s one day where Paris throws a party like no other, it’s the French national holiday–Bastille Day. Each year on July 14, the city comes to life with a range of mega festivities. From parades and street dancing to a spectacular firework display around the Eiffel Tower, this is an unforgettable celebration that you don’t want to miss.

Bringing some of the biggest music acts from all over the world to Paris, Solidays is a three-day summer festival with heart. With all ticket proceeds donated to relief organisations fighting AIDS, there’s nothing better than enjoying yourself and knowing that you’re also helping others. Check out the line-up and get your festival threads ready.

Every year at the end of June, over 650,000 people gather on the streets of Paris to celebrate the diversity of the lesbian, gay, bisexual, transsexual (LGBT) community and their ongoing fight for equal rights. This is not a subtle event. Exploding with colour and costumes, Paris Gay Pride takes on an over-the-top carnival-like atmosphere with a parade through Paris and a huge party at its end. Keep up with the good vibes at a pub, restaurant or club in the gay-friendly Marais district where events kick on through the night.

Not necessarily a ‘festival’, but the atmosphere that grips Paris during the Tour de France is captivating. This cycling event is considered the largest of its kind in the world and ends in the City of Light. Time your trip right and you’ll be rubbing shoulders with over a million sporting fanatics as cyclists zoom towards the finish line along Avenue de Champs Élysées.

The French are known for their food. But did you know that there is a Paris festival that was created solely to celebrate coquilles St-Jacques or in English, sea scallops? Small in size, big in flavour this Montmartre festival held at the end of January also dishes up oysters, crepes and live music, and is a great way to familiarise tastebuds with Brittany’s specialties.

Combine your visit to Paris with tickets to The French Open and you’ll cheer on the world’s best tennis players as they slam through rallies at Roland-Garros. If you love tennis, there is no better place to watch the live action. Strapped for cash or missed out on a seat? Giant screens are erected under the Eiffel Tower and near Hotel de Ville, so take some wine and cheese and grab a spot.

CheapflightsCity breaks6 Paris festivals worth planning your trip around
We use technical, analytical and marketing cookies to help you with things like logging in and picking up your search where you left off.