With Norwegian Air’s recent launch of direct flights to The Emerald City from the UK, it’s a great time for a visit to this particular corner of America’s Pacific Northwest. Whether it’s your first visit to the largest city in the region or a return to a favourite haunt, this new route couldn’t come at a better time. 2017 just so happens to be a great year to visit Seattle, so get onto Cheapflights.co.uk to search for those flights (just use our handy filters to remove flights with stopovers if you wish) and get that city break planned…

Watching films, celebrating film, and immersing yourself in the culture of cinema from 18th May to 11th June is what Seattle becomes all about in this annual cultural event. This year’s features include a tribute to Anjelica Houston and a fascinating documentary about John Coltrane. Seattle is one of the few cities in the United States that still hosts those palatial movie theatres of the early 20th century, so don’t miss the chance to really celebrate them.

This is exactly what it sounds like. Participants run a course through Seattle, passing various stages featuring live acts from local and regional rock, jazz, blues, punk, and funk acts. Full Marathon and Half Marathon events are available, or you can just cruise the route and enjoy the energy from stage and street. The 2017 run is on 17th and 18th June.

This is the big one. Weeks of festivals, events, showcases and general awesomeness infuse the city and draw visitors from literally all over the world. The huge kick-off party is on 14th June this year, with fireworks visible from Mt. Rainier (some say from space) on 4th July and the Seafair Weekend and Airshow wrapping everything up beginning 4th August. Be advised that getting accommodation is sometimes tricky to get during the hottest weekends, so book early in order to not miss this north-west extravaganza.

Over one hundred restaurants in town offer a three-course dinner for $32 (and an $18 three course lunch at select locations) twice each year. This celebrated event showcases the variety, quality, and quirks of Seattle’s dining scene. As a bonus, it gives visitors a way to save on their meals while they visit. Restaurant Weeks for 2017 take place in October, with specific dates still to be announced. The April week has of course already happened, but they’re planning another in April 2018.

A relatively recent Seattle instalment, this museum features the mammoth and awe-inspiring art of Dale Chihuly. Although massively popular when it first opened, the news has faded somewhat for locals and you’ll be able to stroll the place in relative peace this year. Give yourself a couple of hours to tour the smaller exhibits, then lose yourself in its prize centrepiece – a glass greenhouse festooned with tropical-seeming glass sculptures.

If you want kitsch, you’ll find it here. The Argosy Christmas Ship gets decked with lights and packed with performers who tour the Puget Sound and evoke Christmas Cheer upon its waterfront towns and villages. But that’s only half the fun. The huge festivals each of these towns put on for the arrival of the Christmas Ship are parties unto themselves, sporting bonfires and costumes, food and drink, along with plenty of carolling and merriment.

Plus there are all the classics 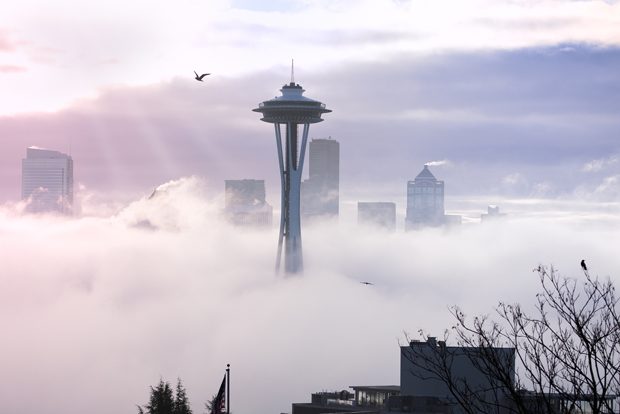 Besides what’s hot and happening this year in Seattle, a city this size never disappoints with touristy things to do. Between your on-time, on-topic events, leave room in your schedule for iconic Seattle experiences, such as the following…

Start your trip by finding that Norwegian Air flight on Cheapflights.co.uk. Just search for flights to Seattle and then use our filters to remove any stopover results.