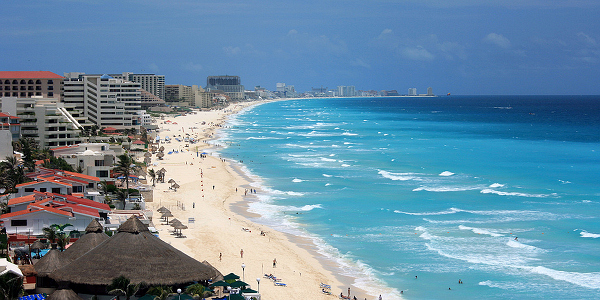 Four million people a year descend on Cancún to revel in its ancient Mayan temple ruins, the world’s second-largest coral reef (populated by pink conch and sea turtles, no less!), great snorkelling and scuba diving and the generally raucous party vibe that gives both Ibiza and Las Vegas a run for their money.

The pristine beaches along this portion of the Yucatán Peninsula draw party animals, outdoor adventurers and families back year after year. Developed for tourism in the 1970s, the “7”-shaped Cancún Island alone boasts 22.5km (14 miles) of white sands and crystal-blue Caribbean waters.

Now’s a great time to head to Cancún, as high season draws to a close and flight prices and weather conditions are at their best. Grab your bathing suit and sunscreen and head to one of these, the best beaches in Cancún and the nearby Mayan Riviera.

With billboard beauty, this easily accessible strip has become the face of Cancún. Tackle the surf, rent a jet ski or simply watch the sunrise.

Protected from the surf by a small island, the calm waters and wide beaches are popular with families.

A small inlet protected from rough seas, Half Moon Bay is ideal for snorkelling and kayaking. Local dive shops run trips out to the nearby reef.

A hike through the jungle and a scramble over ancient Mayan ruins at the city of Tulum leads to a breathtaking vista of rocky cliffs, powder sands and light blue seas.

While no secret hideaway, this lesser known beach offers a decent respite from the more crowded spots on the Mayan Riviera.

CheapflightsBeach & NatureBeaches in Cancun: want to know which one’s best?
We use technical, analytical and marketing cookies to help you with things like logging in and picking up your search where you left off.