Postcards might seem a touch outmoded in this, the age of Twitter, Facebook, Instagram and email. But we reckon they’ll stick around for a little while longer, not least because it feels so much more exciting to receive a message through the post as opposed to online.

Of course, the age-old problems with postcards still exist. It’s not easy to find one that doesn’t have a cringeworthy joke or cheesy picture on it. And they often arrive at your friend’s or family’s home after you’ve landed back in the UK.

It’s for these reasons that a new app-based service called Race It Home might appeal.

The app allows you to create a bespoke postcard from a picture you took on holiday. Then with a few clicks, you can select a preloaded UK address to have it posted to.

The app runs on an account system. Users charge credit to their account using PayPal or credit card. They can also add addresses at any time. Users are advised to do these two things while at home in the UK.

The bespoke postcards are printed and dispatched in the UK, meaning they reach their UK destinations in one to five days (depending on the delivery option selected). 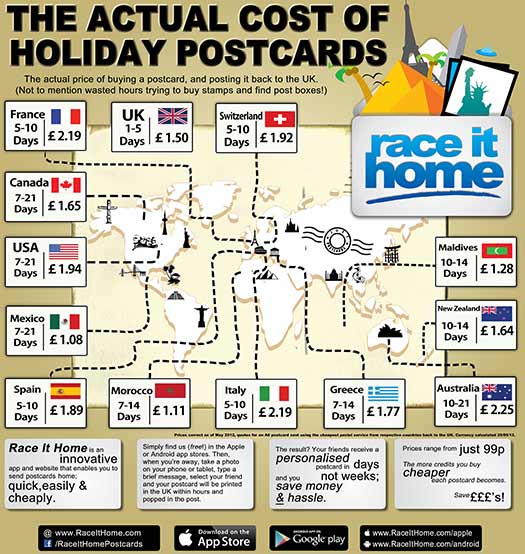 We love receiving mail, and we love the idea of bespoke postcards, but we can’t help but wonder if this service will ever take off.

Instagram and other photo-sharing apps are ever more popular, and crucially, free. So will people be prepared to spend money sending a card? Probably not.

Furthermore, the app takes away the two things that make a postcard great in the first place – the fact that it’s handwritten and posted from a foreign country.

As a side note, in their marketing spiel Race It Home do raise an interesting point about the cost of sending postcards these days.

After comparing the price of average postcard and stamp costs across 12 popular holiday destinations, they found it costs twice as much to send a traditional postcard back to the UK from Italy and France than it does to send one more than 5,000 miles home from Mexico.

It’s just £1.08 to send a card from Cancun, though it can take up to three weeks for the postcard to arrive. France and Italy cost £2.19 per average postcard, which is similar to the £1.94 it costs to send one from the US.

Understandably, costs from Australia are high, topping the chart at £2.25. The Maldives seems relatively cheap given the distance, at £1.28 per postcard, however they can take up to two weeks to arrive.

Where will the Olympic Torch be this week?

Your Guide to North Korea

Profits up for easyJet but Olympics cause a dip in demand