The first plane flight came courtesy of the Wright brothers in the United States in 1903. Fast-forward 110 years and air travel is the go-to mode of transport for travellers who are planning to take a trip that spans all four corners of the globe.

While reclining seats, onboard meals and the chance to while the hours watching an array of Hollywood movies has lured flying aficionados for decades, a world of creative ways to get from A to B awaits for those who are willing to break away from their comfort zone. (The featured image is by doyoubleedlikeme.) 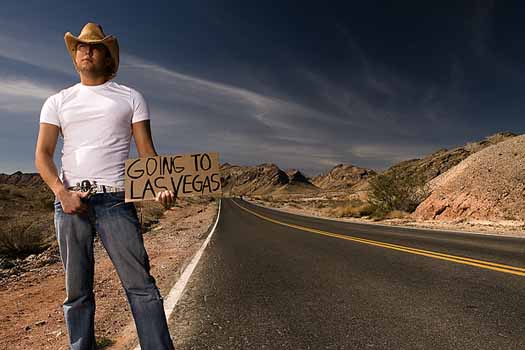 Hitch-hiking in the USA

Although hitch-hiking will mean that you will have to put all thoughts of a fixed timetable on the back burner, you can be assured of meeting a host of weird and wonderful characters on your travels, as well as getting the chance to stretch your shoestring budget even further.

Travel blogger Benjamin Jenks, from Michigan, managed to clock up 14,000 miles hitch-hiking his way across the United States in 2009, only forking out $40 for the privilege, starting his trip in Venice Beach, California and taking in places like New Orleans, Vegas, Texas and Arizona, before ending his trip in Portland, Maine.

Offering tips on how travellers can become hitch-hiking pros, Jenks suggests that travellers choose a specific spot that will increase their chances of getting a ride, such as a spot with plenty of room for a car to pull over into.

He also stated that travellers should get a firm grip on hitch-hiking laws in each state, dress according to the area you’re in, such as more conservatively in smaller towns, and choose wisely when it comes to assessing whether a ride is safe to take or not.

Vietnam is still relatively under-developed compared to South East Asian countries such as Thailand, and travellers can still feast their eyes on paddy fields and unspoilt villages, if they are brave enough to veer from their guidebook recommendations.

One of the most popular ways to see the country from a different perspective is to take one of the guided motorbike tours, the most famous of which is offered by Easy Riders.

Travellers will speed their way across Vietnam on the back of a two-wheeler, with their guides up front, and can choose from three-day trips that take you from the city of Dalat, dubbed “Le Petit Paris”, to the beach resort of Nha Trang and eventually all the way to Hanoi, a good base for exploring the picturesque Ha Long Bay.

No travel experience is more of a throwback to the 1970s than holidaying in a campervan or motorhome. New Zealand is said to be prime caravanning territory, at just 1,274 miles long compared to the epic length of the UK’s coastline.

There are a multitude of routes to choose from, including a 10-loop of the North Island that begins and ends in Auckland.

Those with more time on their hands can attempt a 21-day one-way trip across the length of New Zealand, starting in Auckland and ending in Christchurch or vice versa.

This takes in some of New Zealand’s finest sites, including the stunning Abel Tasman National Park in Marahau, as well as the Franz Josef Glacier, taking a helicopter ride to get the best view, and getting a chance to do a spot of whale-watching in Kaikoura.

(Have you seen our recent posts about New Zealand?

The Hobbits are coming! New Zealand gears up for more Tolkien Tourism

Getting on your bike will never be as much fun as when you are taking a breathtaking and, no doubt exhausting, overland cycling trip across some of the world’s most-loved continents.

Although this kind of trip is probably more the preserve of the die-hard mountain bikers, the not-so-experienced can tag on to cycling trips organised by a number of specialist tour operators.

For those who really want to be wowed by their visit to South America, a 15-day cycling trip taking you from Arica in Chile’s far North to La Paz in Bolivia is the ideal option.

Highlights of the trip will include the deserts surrounding the Lluta and the Island of the Sun on Lake Titicaca, where you can feast your eyes on the ruins of ancient civilisations.

As Arica is just 12 miles from Peru, if the mood strikes you, you can also take a diversion to climb Machu Picchu, a world heritage site dubbed “the most amazing urban creation of the Inca Empire”.

Island-hopping has been popular on the Greek islands for decades, and is now becoming an increasingly popular way to take in Croatian islands too. Popular destinations include Hvar, which some have labelled Croatia’s answer to Cannes, and the acres of pine wood and vineyards on offer on Korcula.

Travellers can choose to take one of the many catamarans or ferries to explore the network of islands, or opt to take a skippered cruise around the islands.

Sample itineraries include a trip from Split, the second-largest city in Croatia, to Dubrovnik, a picturesque UNESCO World Heritage site, which takes in Korcula and Hvar, and towns such as Stari Grad, the oldest in Croatia. The cruises are normally aimed at the under-35s market, so fun and merriment are guaranteed.

Sights to see: The Pinnacles

How to take great pics with your iPhone – part 2

The world’s most famous resting places

10 of the newest capital cities in the world