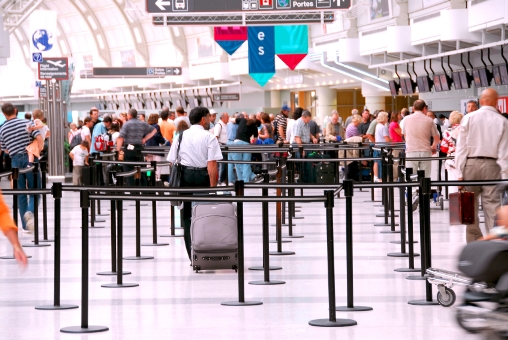 Gatwick Airport has apologised to a 38-year-old soccer coach after a security officer asked him to turn his T-shirt inside out because it was “a bit threatening”.

Lloyd Berks was pulled aside while queuing at the Sussex gateway with his partner and two children on 27 February as he prepared to board a cheap flight to Austria.

The soccer coach, from Bexley in Kent, was then told by security staff that the ‘freedom or die’ slogan on his T-shirt might cause anxiety and that he should hide it from view.

“The guy who checked me told me to turn my T-shirt inside out,” Mr Berks explained.

He told The Telegraph: “I thought he was joking at first. It is turquoise and white, it is just a design T-shirt, it is not gothic or in your face and the slogan is quite small.

“I thought it was funny at first but you have to think about people’s civil liberties. They could see we were a family travelling together. I was hardly a terrorist risk.”

A spokesperson for Gatwick Airport apologised for the incident and reassured The Telegraph that scrutinising clothing slogans is not part of its security procedures.

“London Gatwick does not apply a policy relating to appropriate or inappropriate T-shirt slogans worn by passengers passing through airport security,” she said. “While safety and security are our highest priorities, we also expect staff to apply common sense and judgment.

“The reported incident sounds unnecessary. We would apologise to the passenger for any inconvenience or embarrassment caused.”

CheapflightsNewsGatwick apologises for fashion police incident
We use technical, analytical and marketing cookies to help you with things like logging in and picking up your search where you left off.