If the UK’s summer of sport isn’t quite doing it for you, there is a popular sporting event taking place Down Under this weekend.

The Camel Cup, an annual race on camelback held in the town of Alice Springs, Australia, will be getting underway this weekend.

It may sound like a strange concept, but the unpredictability of the animals involved makes the event more exciting and entertaining than your average horse race.

The Camel Cup is the sort of competition that could only take place in Australia, and it began in true Aussie fashion – as a bet between two mates.

The very first race was held in 1970, when friends Noel Fullerton and Keith Mooney-Smith decided to race each other along the dry bed of a river in Alice Springs. The race was staged as part of the town’s centenary celebrations.

Originally a one-off, the race proved so popular that Alice Springs decided to turn it into a yearly event, and it has been growing every year since. 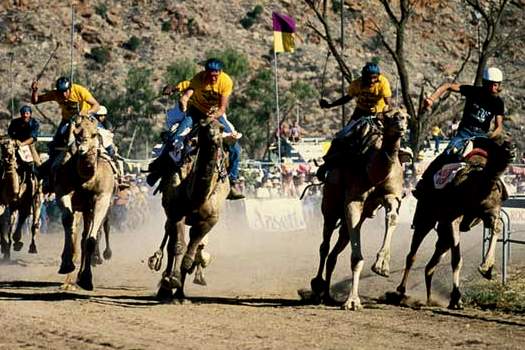 These days, the race is held in a proper racing venue and sees fans from all over the Northern Territory of Australia descend on the town.

Taking place on July 14, the Camel Cup is about more than just racing these days. The day-long event takes on a carnival atmosphere with colourful rides and stalls, music, dancing and (in true Aussie fashion) plenty of bars.

There is also the rickshaw races, which sees two people pull two passengers in a metal rickshaw to try and win a cash prize.

Of course, the main draw is the camel racing. And while competitors in the fast-paced races are out to win, there is a tongue-in-cheek feel to the whole thing. No matter who wins, everyone always has a good time. So, what are you waiting for?

Head to Australia for the Camel Cup was last modified: June 26th, 2019 by Oonagh Shiel

Ronald McDonalds around the world

Are you ready for the Zombie Apocalypse?

Iconic American Restaurants that Appeared in the Movies