The phenomena of the aurora borealis (northern lights) and aurora australis (southern lights) have mesmerized humanity since the first sightings hundreds of years ago. The aurora borealis and aurora australis are the result of electrons colliding roughly 80 to 480 kilometres above the Earth’s surface, guided by Earth’s magnetic field to form two ovals roughly centred at the globe’s magnetic poles..

Named after Aurora, the Roman goddess of dawn, and Boreas, the Greek god of the north wind, the dazzling green, pink, purple and white rays of lights are most often viewed between the north and south polar latitudes between 60 degrees and 75 degrees. However, the aurora borealis can be less frequently spotted in even more southern areas in places like Scotland and the United States.

No matter how much planning you do, there is no way to predict when the northern lights will appear. But there are several ways to increase the odds of a sighting. Here are some tips for viewing the northern lights, along with 10 places that offer the best chance to see this phenomenon of light and beauty in 2016.

Just as it’s difficult to predict  when the northern light will appear, it can also be challenging to get good flight deals to those destinations if not booked well in advance. Luckily, Cheapflights.co.uk allows you to search and compare million of flights, hotel and car hire deals all in one place so you get the best possible deals.

Tips for seeing the northern lights

One of the most likely spots to view the northern lights is in Lapland, Finland’s northernmost region, where the surreal spectacle is visible roughly 200 nights each year (the peak is August to April). The farther north you go, the better your chances. From inside glass igloos at Kakslauttanen Resort near Urho Kekkonen National Park to the comfort of glass-ceiling luxury in the Eagle’s View Suite at Hotel Iso-Syöte to the great outdoors snowshoeing, cross-country skiing or dog sledding, there are many options for viewing the light show.

Beginning in early September and peaking in the cold, dark nights of winter, the northern lights are most reliably viewed in Fairbanks, Alaska. Fairbanks is geographically under the “aurora oval,” and tour operators like Northern Alaska Tour Company and Salmon Berry Tours offer northern lights tours. The best times for viewing are between 12:30 a.m. and 4:30 a.m. in September and March and between 11:30 p.m. and 3:30 a.m. during the winter. Consult the University of Alaska Fairbanks Aurora Forecast to determine the best days and times to view the northern lights.

It’s hard to predict when the green, pink and violet dancing lights will appear, but head to northern Norway for your best chance to view them. Options include the Lofoten Islands, Trøndelag and along Norway’s coast up to the North Cape. Plan your trip from late September to late March, when the nights are long (between 6:00 p.m. and 1:00 a.m. is the peak time for sightings). Download the free VisitNorway.com Norway Lights App (for Apple, for Android and for Windows) to find out when and where you can see the northern lights.

There are many places to spot the northern lights in Canada. In the western province of Alberta, the sky becomes ablaze with pulsating colour from September to April. Head to Jasper National Park or Wood Buffalo National Park for a chance to see the northern lights, as well as the Milky Way. A spectacular show also takes place in Yukon, Canada’s westernmost territory, each fall. From August to April, it is possible to see the neon green aurora borealis on clear nights.

Watch the time-lapse video of the northern lights captured from a window seat while flying over Canada here.

Between September and April, locals and visitors alike are treated to heavenly northern lights sightings. Check The Icelandic Met Service for the northern lights forecast and head outside the capital, Reykjavik, to improve your chances of spotting the unforgettable beauty. Reykjavik Excursions offers a variety of northern lights tours August to April including tours by bus or boat and a combo geothermal bath trip paired with a northern lights viewing.

Glacier National Park in northwestern Montana is one of the best spots in the U.S. for viewing the northern lights. After a day of hiking the park’s 1,126 kilometres of trails and enjoying views of the Rocky Mountains, head to St. Mary in the summertime to sneak a peek at the phenomenal light show, which tends to appear most often in the early morning hours.

Spotting the magical, dancing northern lights in the U.K. is best done from northern Scotland, especially along the Caithness coast and the Orkney Isles. Other options include Shetland and The Outer Hebrides. While Scotland offers the best chance to see the northern lights, particularly in January, they have been seen as far south as East Anglia, England. Aurora Watch UK provides text message alerts via Twitter @aurorawatchuk when auroral activity is likely to occur.

Lapland, in the far northwest corner of Sweden, is a remote area of Arctic plains, mountains and glaciers that is a prime spot for viewing pale pink and light green aurora borealis. From the beginning of September until the end of March, visitors to the two northernmost populated cities of Kiruna and Luleå have a good chance of spotting the northern lights, but one of the best chances is at the Aurora Sky Station at Abisko National Park in Abisko, a village in northern Sweden known for its clear skies, cold nights, and surrounding mountains, which block out any light pollution. A chairlift takes visitors to the Aurora Sky Station observation tower, as well as to an informative exhibit on the northern lights.

On a cruise along the Norwegian coast

While it’s not possible to guarantee a sighting of the northern lights, Nurtigruten cruise line is so certain of the odds you will see them on its cruises along the Norwegian coast that the cruise liner promises if the northern lights don’t appear, passengers get a free voyage. Options include the 12-day Classic Round Voyage from Bergen, Norway to Kirkenes, Norway and back to Bergen and the 12-day Astronomy Voyage, which follows a similar route.

Ready to see the northern lights? Then hop on Cheapflights.co.uk website to start your adventure.

A light show in Iceland that’s NOT the Northern Lights 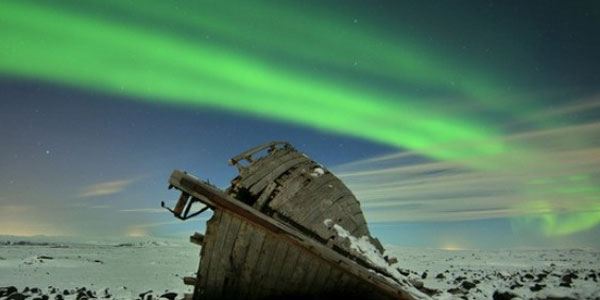 Where to see the Northern Lights

Close(ish) to the UK, three places where you can witness the heavenly light show
Oonagh Shiel

CheapflightsTravel InspirationNature’s light show: Where, when and how to catch the northern lights this year
We use technical, analytical and marketing cookies to help you with things like logging in and picking up your search where you left off.