We can’t help but wonder what the real Father Christmas would make of Philadelphia’s Running of the Santas.

At first glance, this wild mass pub-crawl doesn’t really seem like the kind of shindig you’d find him at, but we think there are a few aspects that would float his sled.

Of course, since it’s always scheduled in early December, he’s always too busy to take part himself, but still…

We’re sure he’d approve of its renowned “festive” spirit (read: massive party). And the sight of 5,000 people (Running of the Santas were kind enough to let us use all these pictures)  in his getup dashing down the street together would no doubt tickle him, too.

Being a fan of the odd cheeky beverage (let’s be fair, that belly can’t just be a product of Mrs. Claus’ cooking), we think he’d enjoy the opportunity to sink one or two cheap beers in the welcoming watering holes of City of Brotherly Love’s Northern Liberties neighbourhood. Especially in a heated tent with thousands of other like-minded individuals (hanging out with elves every day must have its drawbacks). 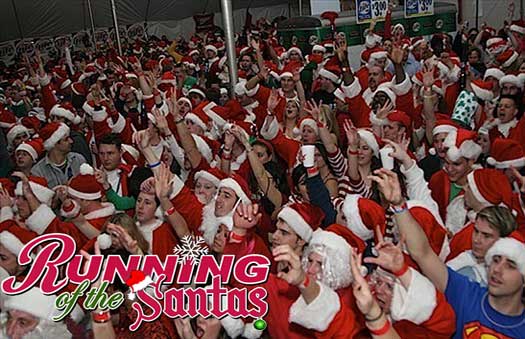 Father Christmas wouldn’t have any problem navigating the course, either. After all he’s almost certainly well practised in navigating his way from an Irish pub (there’s probably one in every town he visits) to the North Pole.

Where he’d normally ride a sled and follow the red nose of his most trusted steed to the top of the world, here he’d be on foot following the equally red outfits of his most inebriated groupies as they charge the four blocks from the Irish bar Finnigan’s Wake to Philly’s very own North Pole indoor music venue Electric Factory.

Admittedly, he’d probably give the “Hottest Santa Contest” a miss (lest he incur the wrath of Mrs. Claus). And a small number of his devotees will always write themselves off his gift list with their overindulgent antics.

But we’re sure he’d overlook these minor negatives, especially when you think that a portion of the proceeds benefit charities supporting leukaemia patients and former Philadelphia police officers. 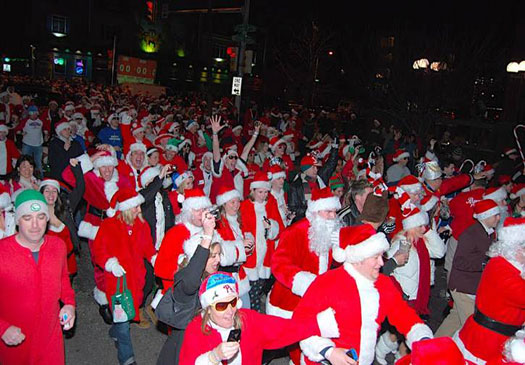 We guess if the jolly red-suited fella didn’t fancy a massive drinkathon, he could always amuse himself by entering the Santa Claus World Championships. He wouldn’t be a shoe-in for the win though, as he’d have to call upon some of his vertically challenged assistants to make up his team.

Rad Santa – Running of the Santas in Philadelphia was last modified: June 26th, 2019 by Brett Ackroyd

Ryanair to set up new base in Krakow

‘Saga louts’ advised to behave when on holiday

Best chance to see Northern Lights in 10 years this autumn