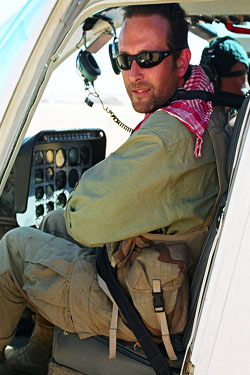 While many travellers dream of carrying out the next Ray Mears-style expedition into the wild, armed with nothing but a Swiss Army knife and the sheer will to survive, few are prepared to truly push themselves to the limits. Most people simply opt for a quick adrenalin fix in the form a spot of whitewater rafting or bungee jumping before returning to the comfort of a plush hotel. (Featured image: Namib Desert, Coda)

2012 World Travel Award nominee, expedition leader and all-round explorer Sam McConnell certainly breaks this mould. Close brushes with African war zones on the Angolan border and solo treks across vast desert plains are just some of the many feats that help him continually test his adventurer mettle.

In 2002, McConnell walked solo and unsupported across the world’s oldest and highest dunes of the Namib Desert (along the coasts of Angola, Namibia and South Africa), earning him a fellowship at the Royal Geographical Society. Carrying just 18 litres of water, a 50-year old map and compass, he was dropped by helicopter on the desolate Skeleton Coast. Six days later and out of water, he emerged from the desert at Dead Vlei.

For many would-be globetrotters, the prospect of being thrust into a barren landscape without a GPS system for that all-important “Plan B” would be unheard of. However, McConnell’s 16-year love affair with the most inhospitable parts of Namibia meant that what would seem an insurmountable challenge to others was eminently achievable.

Asked why he became an explorer, McConnell answers simply to “live”, before offering a no-nonsense desert survival guide for those who are keen to follow in his footsteps. “The beauty of deserts is that you really don’t need a lot of kit, we as animals are better adapted to this environment than the Arctic say.

“Do what the locals do, avoid all man-made fibres, protect your camera and wear a hat. Trying to get a tan on is not a good idea.”

McConnell has led more than one hundred teams in a number of expeditions since 1996, including one for disadvantaged youths to the imposing Mount Sinai, in Egypt’s Sinai Peninsula. This unique site attracts scores of religious pilgrims each year, keen to see the place where Moses is said to have received the Ten Commandments.

However, McConnell’s most memorable trip was along Namibia’s Skeleton Coast; a stretch of coastline associated with famous shipwrecks and stranded sailors who all fell at the mercy of the Coast’s pounding surfs and dense fogs.

“Last year’s Skeleton Coast Expedition was pretty epic; I led nine people on a one-month’s unsupported trek up the bleakest coastline in the world, with 40kg packs and surviving only by desalinating seawater each night. I lost 10kg.”

McConnell’s plans for 2013 are also similarly ambitious with a British Exploring Society expedition to Namibia planned. This will require him to set up a base camp, feed and water 80 people on the edge of the Namib Desert.

He is also exploring new territory, with a visit to Muscat in Oman, to look into the possibility of running expeditions in the Empty Quarter; the largest sand desert in the world.

It doesn’t appear that McConnell will be hanging his explorer’s hat up in favour of the quiet life any time soon. When asked how he would imagine his last expedition, he says:

“To walk off and disappear into the wilderness; like a Bushman at the end of a long life.”

You can vote for Sam until November 25 at http://www.worldtravelawards.com/vote

This is the OLDEST mountain range in Europe

Spain VAT hike: how will it affect you?

War of the slopes rages on in France