Suspension bridges, covered bridges, wind-and-rain bridges, rope bridges, ornamental bridges… Sure, there’s a practical purpose to every bridge; that river has to be crossed or that gorge spanned.

But it’s the romance, legend and spectacle of the bridge, that earns it a place in our top 10 of spectacular bridges round the world. 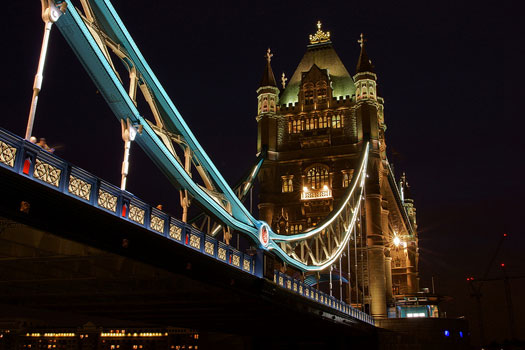 Tower Bridge, London. Seen from the Thames Path, in front of the Tower of London. Photo by Peter G Trimming

The world saw Tower Bridge last year during Britain’s remarkable summer of Diamond Jubilee festivities, the Olympics and Paralympic Games. It was built in 1894, all Victorian Gothic with Cornish granite and Portland stone, close to the Tower of London from which it gets its name.

Standing 42 metres above the legendary River Thames, its walkways are vantage points for many iconic London landmarks.

Plus, it’s the only bridge on the Thames that can be raised to let boats pass. The bascules are raised approximately 1,000 times per year. Search and compare: cheap flights to London 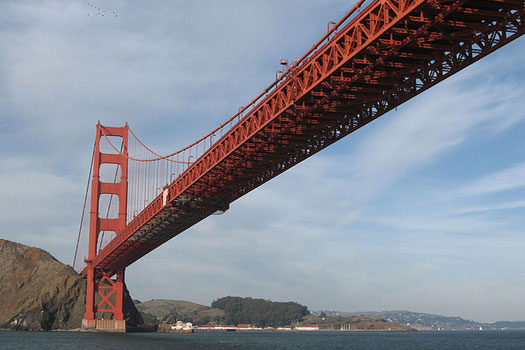 No list of bridges is complete without this orange-vermillion bridge that spans the strait linking San Francisco Bay with the Pacific Ocean.

It has stood above the Golden Gate, often shrouded in fog, for 75 years. At 4,200 feet (1,280.2 metres) long, the Golden Gate Bridge was, for almost 30 years, the longest span in the world. In a city of superb see-before-you-die attractions, the bridge is top of the list.

Visitors can walk or bike across it. Alternatively, the Bridge Pavilion tells the story of the bridge and has a range of souvenirs for friends and family back home. Search and compare: cheap flights to San Francisco 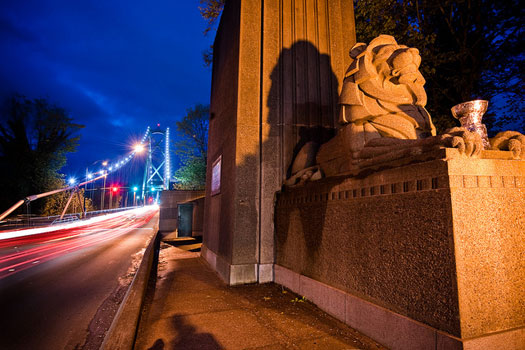 The lion is not just guarding the Lions Gate Bridge, when this photo was taken he was looking after the Stanley Cup too! Photo by kennymatic

This is the bridge that Guinness built. Really. The Lions Gate Bridge, known officially as the First Narrows Bridge, spans Burrard Inlet and connects the City of Vancouver to the North Shore (North Vancouver and West Vancouver). The Lions Gate refers to the mountain peaks (The Lions) that are visible to drivers heading north.

The wealthy Guinness family invested heavily in West Vancouver and part of the deal was that they – through their British Pacific Properties Co. – would build all roads and water lines. Knowing that they needed to make the area more accessible they were involved with the construction of the bridge and, in 1986, gifted its lights. Search and compare: cheap flights to Vancouver 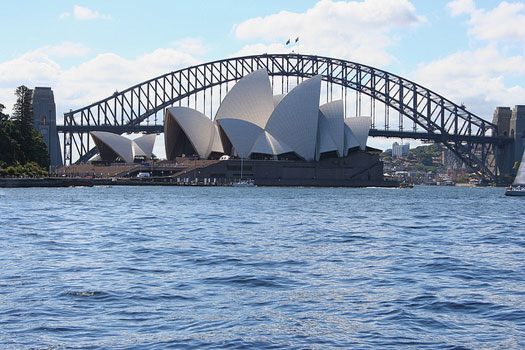 The iconic bridge is the largest steel-arch bridge in the world. It’s not the longest, that honour belongs to the New River Gorge in West Virginia, USA, but it’s one of the most recognisable symbols of Australia.

Fancy climbing to the Pylon Lookout? There’s 200 steps to ascend to get to one of Sydney’s oldest tourist attractions. If you fancy climbing it, you can do that too for about $218 (the standard rate, about £140 ). In overalls and secured to a safety line, you can climb 1,500 metres (4,921 feet) over the arch. Search and compare: cheap flights to Sydney 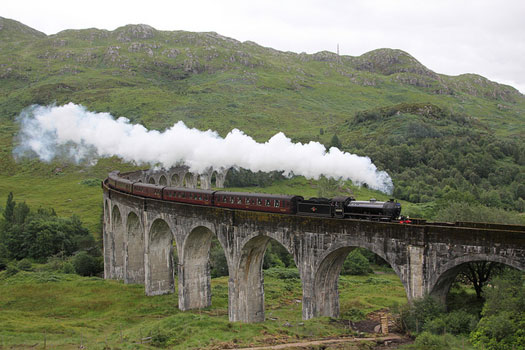 The Jacobite steams around the curve of the Glenfinnan Viaduct. Photo by 96tommy

Fans of the Harry Potter films will recognise this as the railway viaduct that the Hogwarts Express chugs across. It’s not the only film to feature it. It “starred” in Charlotte Gray, Monarch of the Glen, Stone of Destiny and Ring of Bright Water too.

Built by Sir Robert McAlpine at the end of the 19th century, the viaduct is composed of 21 arches, each spanning 15 metres (49 feet) and has a maximum height of 30 metres (98 feet) offering sumptuous views down to Loch Shiel below.

The railway viaduct is on the West Highland Line in Glenfinnan, Lochaber in the Highlands and a return trip, between mid-May and the end of October, will set you back £32. Search and compare: cheap flights to Inverness (the closest airport) 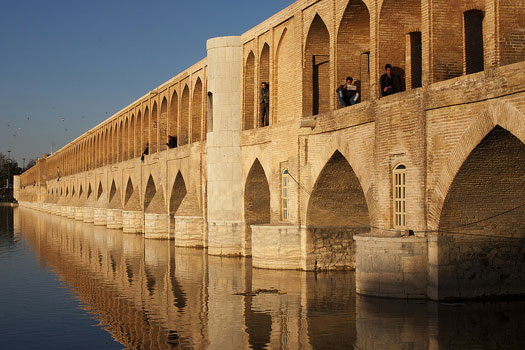 Si-o-se Pol, which means the Bridge of 33 Arches, has stood in Isfahan, Iran, since the 17th century. Spanning the river Zayandeh Rud, it’s one of 11 bridges in Isfahan. It’s one of the most famous examples of Safavid bridge design although Khadjou Bridge is considered to be more beautiful.

There are two rows of 33 arches and its yellow brick and limestone masonry gives it that buttery softness that, when the sun hits it, makes it appear to melt into the river.

It’s a charming bridge of alcoves, where you can sit and admire the view. Or, in the tea house, sip cups of steaming tea. Search and compare: cheap flights to Tehran 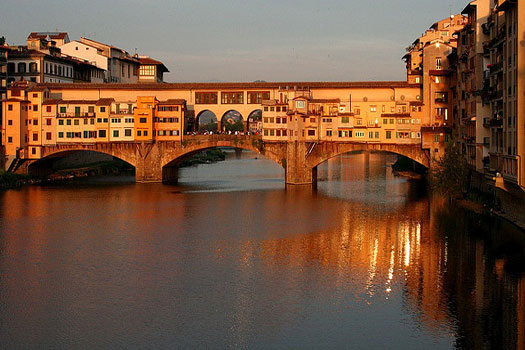 The Ponte Vecchio, Florence, looking golden in the sun. Photo by cfwee

Ponte Vecchio means “old bridge” in Italian and it’s certainly that. The bridge on the River Arno was mentioned in a document as far back as 996AD. Destroyed a couple of times but always rebuilt, it was spared by the retreating Germans in 1944, on the orders of Hitler (although the medieval buildings on each side of the bridge were demolished, blocking access).

Once upon a time, bridges were places of commerce with butchers, tanners and fishmongers plying their trade there. By the end of the 16th century, the bridge was upgraded to sweeter-smelling businesses such as goldsmiths and jewellers. Not too different to who’s there now.

Lying across the Arno at its narrowest point, it’s just 30 metres (98 feet) long. Search and compare: cheap flights to Florence 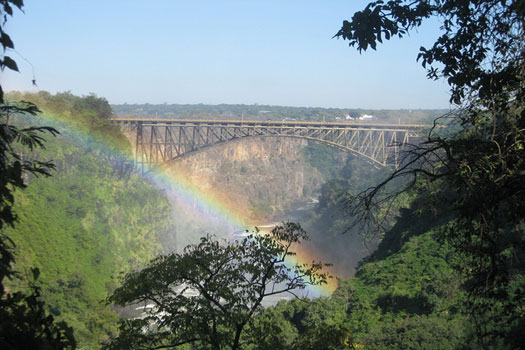 Victoria Falls Bridge is built over the Second Gorge of the Falls. Photo by Shaun D Metcalfe

The Zambezi River roars beneath the Victoria Falls Bridge, which links two countries – Zimbabwe and Zambia. On one side is Victoria Falls, Zimbabwe and on the other, Livingstone, Zambia. A feat of Victorian design and engineering, it took just 14 months to build. To press home its Victorian credentials, it was opened by Charles Darwin’s son, George, in 1905.

It’s a road, railway and footway and a launch platform for thrilling bungee jumps. At 198 metres (650 ft) long and 128 metres (420 ft) above the river, it’s a close second to the spectacular Victoria Falls (Mosi-oa-Tunya). Search and compare: cheap flights to Victoria Falls 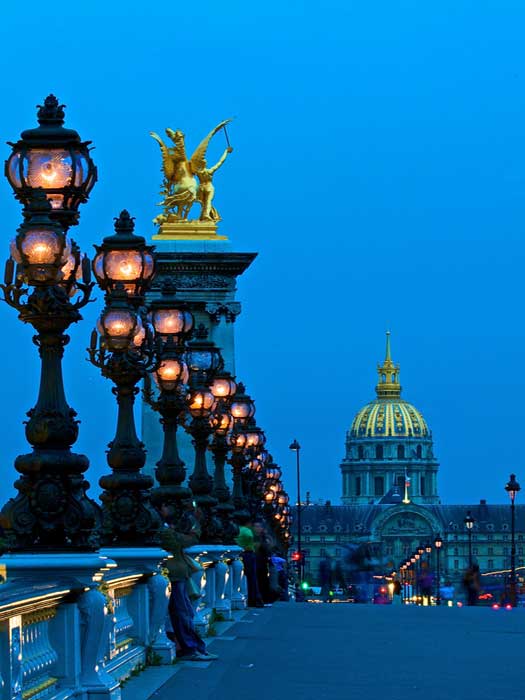 Pont Neuf is Paris’s oldest bridge – and one of its most famous – but the Pont Alexandre III is the most extravagant and highly decorated bridge on the Seine. This arch bridge (connecting the Champs-Élysées quarter and the Invalides and Eiffel Tower quarter) was built for the Universal Exposition of 1900, the great world’s fair.

Russia’s Tsar Nicholas II lay the first brick (it was at a time when France was courting Russia as an ally) and it was named after the Tsar’s father Alexander III.

This historic monument is studded with gilded-bronze winged horses, compositions in copper that represent the nymphs of the Seine (the nymphs of the Neva in St Petersburg are represented downstream) and ornate lamp posts (candelabras really) that are adorned with cherubs. Search and compare: cheap flights to Paris

Teufelsbrücke, Switzerland. The second bridge is in the background. Photo by Nikh2311

This is the bridge that was built by the Devil. Or so it is said. The story goes that the Devil built the bridge and in exchange for his engineering and construction skills, he’d receive the first soul to cross it. The canny village folk sent a goat instead of a person, and, enraged by this, the Devil tried to destroy his newly constructed bridge by throwing a boulder (the Teufelsstein, the devil’s stone) at it.

However, catching sight of an old woman carrying a cross he took fright and ran away, dropping the stone as he went. Myths aside, the Teufelsbrücke spans the Reuss River high up in the Swiss mountains in the canton of Uri. It provides access to the St. Gotthard Pass.

The bridge that is in use now is actually the third bridge. The first, wooden, bridge (the one built by the Devil) was built in 1230 and the second (built in the 1820s) is located close to this “new” (1950s) concrete bridge. Search and compare: cheap flights to Zurich

Did we miss any? What are your favourites? Let us know via the comment form, below. 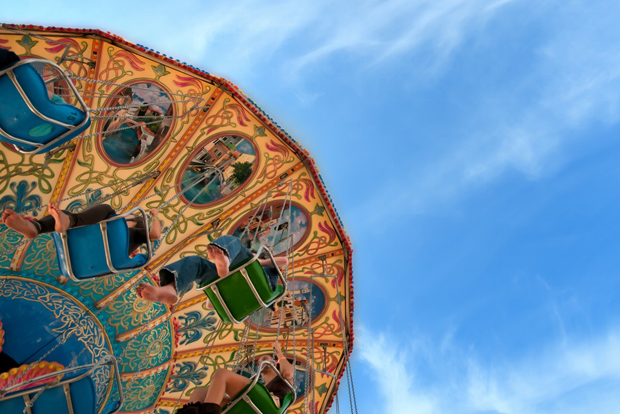 Carnival season: Top picks from around the world

If you were ever after a reason to party this month, well it’s carnival season. With roots in the Christian...
Kara Segedin

Oktoberfest in the sky: Top beer offerings on airlines around the world

CheapflightsTop 10sThe world’s top 10 most spectacular bridges
We use technical, analytical and marketing cookies to help you with things like logging in and picking up your search where you left off.