September ushers in that season of chilly evenings and cosy pubs. There is that festival taking place in Munich (from September 21 to October 6) but we’re looking at other cities and regions where they worship the grain and listing our favourite pub in each place. 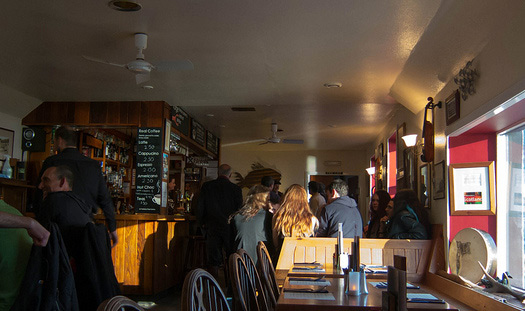 Inside The Old Forge. Photo: smagdali

This storied part of Scotland (Inverness-shire might be most famous for Loch Ness and its resident monster) has a fine heritage of whisky distilling. But brewing is important too with two notables being Cairngorm Brewery in Aviemore and Cromarty Brewing Co in Cromarty.

Where to sample their brews? A pub where “People are important”, “Food figures”, “Music is our glue” and it’s really, really hard to get to. There are no roads so drinkers are looking at an 18-mile hike over munros or a 7-mile sea crossing (take the ferry from Mallaig). So out of the way is this pub that it made it into the Guinness Book of Records as “Mainland Britain’s Remotest Pub”.

It’s The Old Forge in the weathered village of Inverie on the west coast of Scotland. There’s free Wi-Fi (until 6pm), but no mobile phone signal, and its wild, romantic beauty attracts ramblers, adventurers and beer-lovers from around the world. There’s not just local beers on tap (from Glenfinnan Brewery and Isle Of Skye Breweries), there’s also an array of whiskies, gins and wines. And the food is as local as you can imagine: scallops from Loch Nevis, oysters from a nearby loch, langoustines from Mallaig and wild venison. 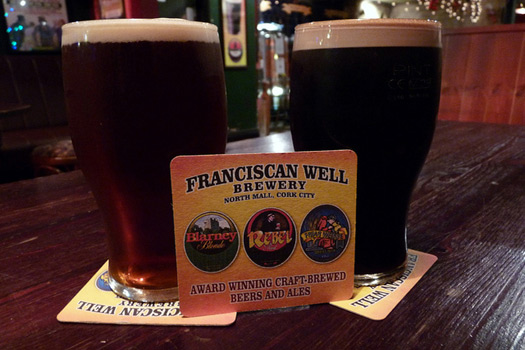 A couple of the beers on tap at the Franciscan Well Brewery. Photo: Irish Jaunt

Cork, the small city in the south, is considered by many (mostly Corkonians, granted) to be the real capital of Ireland. It’s renowned as one of the great food regions of the world and it has a strong tradition of brewing too. Its Murphy’s Stout is more than a match for Arthur Guinness’s black stuff. Heineken brews it now at what was once called the Lady’s Well Brewery on the north side of the city.

In a city of legendary pubs, it’s hard to pick the best, but The Franciscan Well Brewery on the North Mall might just be it. The Brewery was founded in 1998 on the site of a monastery that dates back to 1219.

The brew pub serves an astounding array of beers (brewed traditionally, the staff can almost tell you the fields in which the barley and hops were grown) such as Blarney Blonde, Shandon Stout and the “Rebels” – a red ale and a malt premium lager. They fire up the wood-burning pizza oven on a Thursday evening and there’s a beer garden that’s heated to ward off  chills. 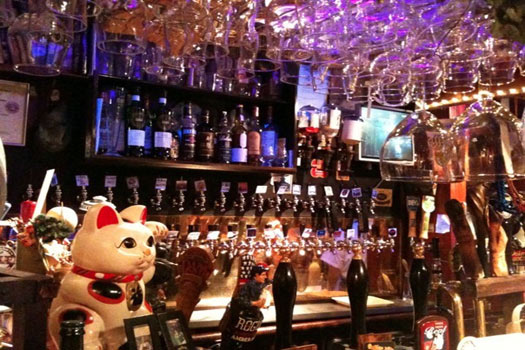 The bar at Popeyes. Photo: kalleboo

The host of the 2020 Olympic Games is the home of Sapporo and Yebisu, two big-hitting brands, and a vibrant craft-beer scene that has been flourishing in the 20 years or so since strict tax laws were relaxed, allowing smaller breweries to produce just 60,000 litres (15,850 gallons) rather than the 2 million litres (528,000 gallons) necessary before that.

The price of a pint is average by Tokyo standards. There is a three-hour-long Happy Hour (5-8pm) during which, if you order a drink with a “crown” beside it, you get a small plate of food too – gratis. And they have a membership card that saves 3 per cent. Oh, and it’s closed on Sundays. 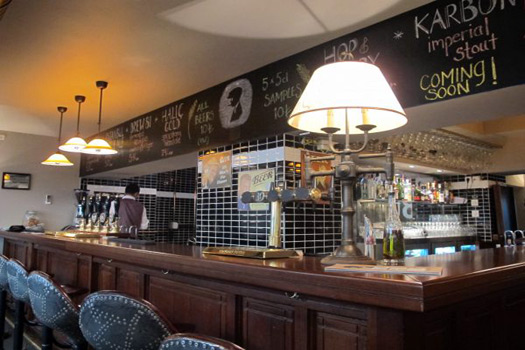 Beyond raki and the mega-popular Efes and Tuborg, there’s a fledgling craft-brew movement in Istanbul. Taps in Bebek was the first and then the Bosphorus Brewing Company started brewing in Gayrettepe in 2012, the brain child of two pilots, Sedat Zincırkiran and Philip Hall.

Now, Philip Hall’s family run the micro-brewery and bar, serving five beers on tap – a light ale (İçmedik); an IPA, where the “I” stands for “Istanbul” rather than “India”; a light lager (Brew 81), a Belgian-style ale (Haliç Gold) and a stout (Karbon Imperial Stout). There’s food too – a fusion of British pub classics and Turkish dishes.

All the beers are made with hops that are grown in Norfolk; there are up to 10,000 litres of beer fermenting on site at any time. There are two enormous kettles behind the bar and, upstairs, a row of smaller kettles in which the brews are bubbling and fermenting. The prices are pocket friendly, all beers cost 10 TL (about £3). 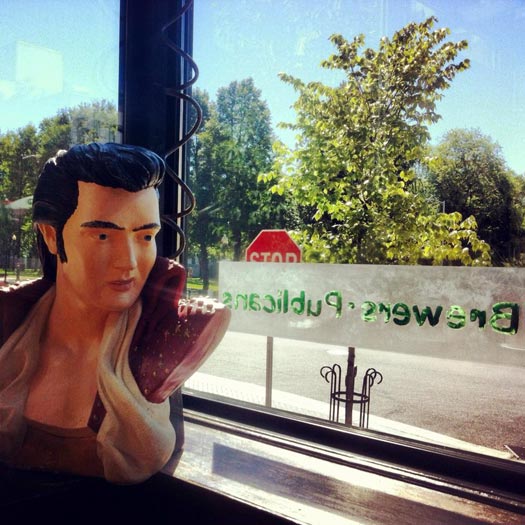 Vermont, that lush green state of farms and maple forests, has the highest number of brewers per capita in the US. There’s about 25,000 people per brewery and many of the micro-breweries are garlanded with awards and accolades.

Magic Hat is one of the oldest brewing outfits in Vermont; its #9, a “not-quite-pale ale”, is one of the state’s best-known beers.

One of the hoppiest bars in Burlington (at 144 College Street) is the Vermont Pub & Brewery. Opened by Greg Noonan, a craft-brewing pioneer and author, in 1988, its “unpasteurised, unfiltered, and unadulterated” beers are award winners in national and international festivals. The Burly Irish Ale for example is renowned – and on tap – and there are Magic Hat brews on sale too. On November 9 and 10, the Vermont Pub & Brewery will mark its quarter century in beer. 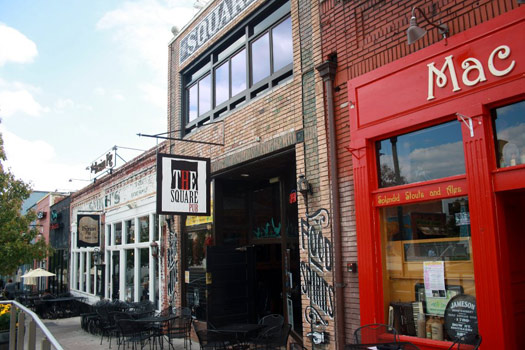 Since 2004, when legislation swept away the state’s 6 per cent alcohol by volume (ABV) law and raised it to 14 per cent, the craft-brew industry has gone from strength to strength.

The “grandfathers” of craft brewing are SweetWater, Red Brick (once known as the Atlanta Brewing Company), Five Seasons and Terrapin, but there is a clutch of newbies such as Burnt Hickory, Monday Night Brewing and the Red Hare Brewing Company that are tickling beer lovers’ tastebuds with their brews.

You’ll find one of the best bars in the country on a bustling town square in Decatur. The Brick Store Pub has been around since 1997 and serves no major domestic beers (there’s no TV, neon or “obnoxious” music either). Instead, there are local, regional and American craft beers as well as German and English speciality beers. There’s a frequent rotation of 17 draught and 75 bottled beers. The Belgian Beer Bar is packed with more than 120 Belgian and Belgian-style bottled beers along with eight on draught. And they have an annual cheese-off, held every September! 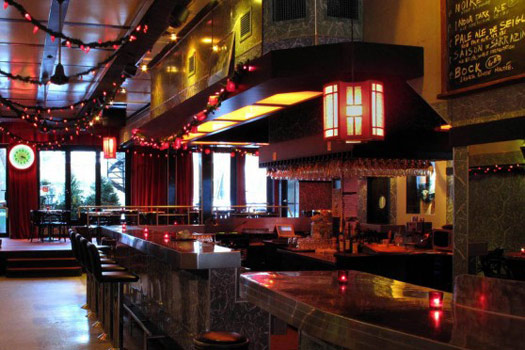 The very first brewery in North America – the Molson Brewery – was founded on the banks of the St. Lawrence River in 1786, which gives you some idea about how far back the brewing tradition goes here. It thrives still at Le Cheval Blanc (809 Ontario Street East), Montreal’s first licensed brewpub.

It’s a busy diner serving light snacks (melted cheese features a lot) in a lively part of town, so get there early and do your best to catch the waiting staff’s eye.

As you’d expect, the French character shines through Le Cheval Blanc but there are some beers that remind you that you’re definitely in Canada. Pépette is a wheat beer made with cranberries and raspberries and Le Cheval Blanc Rauchbier à l’Érable is a dark amber lager brewed with Bamberg smoked malt that undergoes a secondary fermentation with maple syrup. 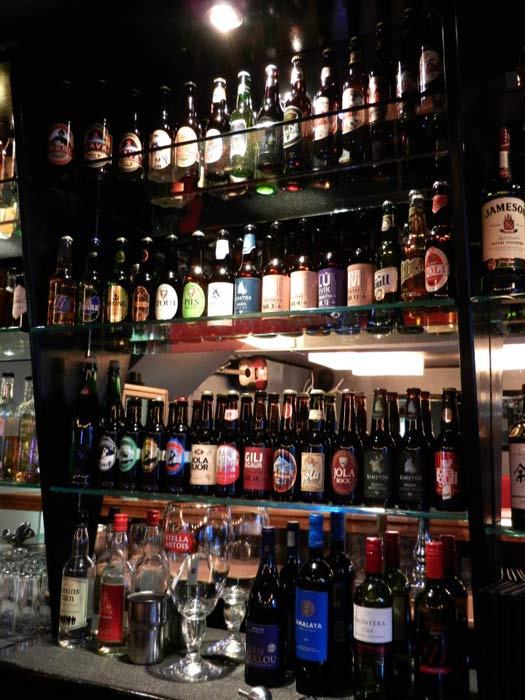 The beers on offer at 73. Photo courtesy of facebook.com/73restaurant

Beer was banned in Iceland from 1915 until March 1, 1989 (the day that’s now known as Beer Day). Other countries wouldn’t stand for that, but Icelanders have their national drink – brennivin, potato-based and 40 per cent alcohol – to keep out the cold.

Nevertheless they have a brewing industry that hops. Ölgerðin Egill Skallagrímsson and Vífilfell are two of the major breweries and an up-and-comer is Ölvisholt Brugghùs, that’s based on a dairy farm about an hour from Reykjavik. They export to the US and Canada, Denmark and Sweden; their range consisting of Skjalfti, a premium, hopped, lager; Mori, a red ale; Lava, a smoked imperial stout and Freyja, a witbier (Belgian-style).

To taste one of these head to 73 (at Laugavegur 73, Reykjavík). This cosy bar-restaurant serves almost all Icelandic beers – and a decent selection of food – and the prices, while Icelandic-high, are considered by locals to be reasonable. 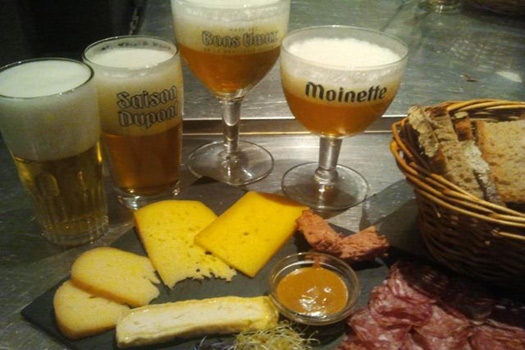 So many of the breweries mentioned in this Top 10 produce Belgian-style beers that we had to include the capital of beer. The Belgians have been making beer since the 11th century. Back then, abbeys brewed and distributed beer to raise money and today, there are still Trappist producers such as Chimay, Orval and Westvletteren. The list of Belgian beer types is long – from Amber ales, through Champagne beers and Lambic beers to wheat beers (check out this quick guide to Belgian beers).

In Brussels, Delirium Cafe is a huge tourist attraction, stocking more than 250 different beers that’ll leave you beerly coherent. But Moeder Lambic Original on Rue de Savoie 68 is a smaller, saner place with a lengthy beer list. The beer is accompanied by cheese plates and cured meats. If you are going to order and drink beers that you can’t get anywhere else, this is the place. 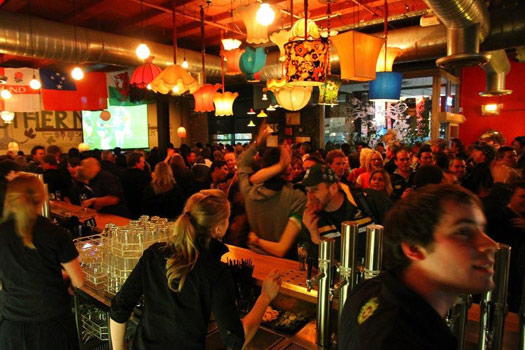 New Zealand just sneaks inside the top 20 in beer consumption per capita, a hefty 75.5 litres per person per year. Lion Nathan and DB Breweries are the two biggest breweries, commanding about 90 per cent of sales. Wellington, the capital city in the south of the North Island, has a buzzing brewing scene with players like Funk Estate, The Garage Project and Geek Beer.

Mac’s Brewbar and Restaurant is a popular spot at the corner of Taranaki and Cable Streets on the Wellington Waterfront. Its beers are award-winners. Last year it picked up gold, silver and bronze medals at the BrewNZ Awards for its Sassy Red, Hop Rocker and Great White beers.

There are even a couple of non-alcoholic options, such as Ginger Beer and Green Apple (made from, you guessed it, Hawkes Bay Granny Smiths). The food menu features the best in NZ cuisine – green-lipped mussels and the mandatory pav. Best of all, on high days and holidays, there’s no surcharge. 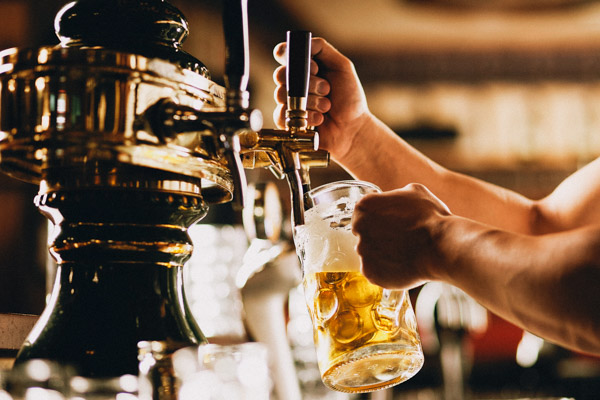 Travelling, drinking beer and the possibility of live Oom-pah music – what could be better? If you’re off to see...
Brooke Parker

Search flights to Milwaukee   Milwaukee isn’t nicknamed brew city for nothing. This sprawling city in Wisconsin has an historic...
Elizabeth Gourd

“Beer, if drank with moderation, softens the temper, cheers the spirit and promotes health.” Wise words from former US President Thomas...
Danielle Harney

CheapflightsCity breaksTop 10 places for beer – and the best bars to drink in
We use technical, analytical and marketing cookies to help you with things like logging in and picking up your search where you left off.