The Olympic ticketing process has left many exasperated sports fans feeling that they’ve got as much chance of scoring the winning goal in the World Cup final as they have of attending the Games in person.

But some can console themselves for not getting inside an Olympic venue by “flying” over one – Wembley Stadium has set up a 200-metre zip wire above its hallowed turf. 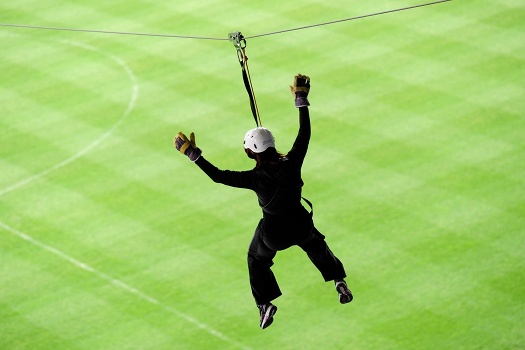 From August 16-22 and August 27 to September 2 visitors can hurtle across the world’s most famous football pitch at 25 miles per hour – a touch faster than the speed Usain Bolt averaged during his gold-winning performance in Olympic 100 metres final four years ago … and a heck of a lot faster than David Beckham ever ran during his illustrious career with England!

Tickets for the zip wire include all other aspects of the standard stadium tour including a visit to the England changing rooms, players’ tunnel, Royal Box and the Exhibition of Champions. Tickets cost £40 for adults and £30 for kids 12-16.

Though no doubt thrilling, the zip line won’t offer anything like the views you get from the Up at the O2 experience, where you can scale the roof of the North Greenwich Arena Olympic venue.

Whip through the air on the Wembley zip wire was last modified: June 26th, 2019 by Brett Ackroyd

Peninsula Bangkok pimps out its own Tuk Tuk

Adopt a coral reef in The Maldives

Dubrovnik, Croatia: A Game of Thrones Tour of King’s Landing