Holidays usually provide the perfect opportunity for couples to reignite the fires of love, with romantic walks along windswept beaches at sunset and al fresco candlelit dinners for two.

Now a survey conducted by luxury travel club Voyage Privé has revealed that, for women, the show of togetherness on a romantic getaway doesn’t begin until they moment the plane lands.

It seems that all thoughts of their other half go straight out of the plane window the moment the word “upgrade” is uttered.

The research revealed that one in four women would happily wave a lofty goodbye to their partners if they were offered one free flight upgrade, indulging in Champagne, smoked salmon and fully reclining seats while their man slums it in Economy Class.

Just 6 per cent of women were generous enough to allow their boyfriend or husband to take the free upgrade, while 69 per cent would rather they both stayed in Economy, so that one partner doesn’t get the chance to revel in the joys of First Class alone. 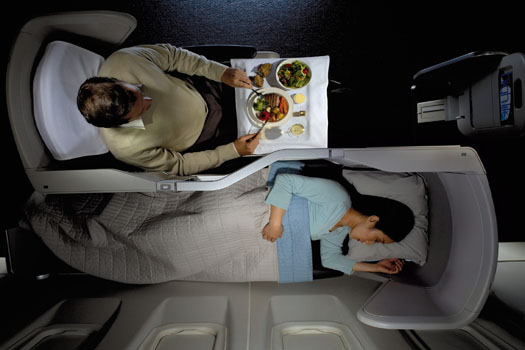 When roles are reversed, it seems that men are happier to put the needs of their partner first, with one in every two men happily offering their ladies the free upgrade.

Men also appeared to enjoy the more down-to-earth atmosphere offered by Economy Class, with 35 per cent opting to stick to what they know, rather than take the upgrade.

Of those men who would snap up the chance for a luxurious flight, men from the London and the South East of England were the worst culprits, with one in five putting themselves forward for a free upgrade.

John Bevan, Managing Director at Voyage Privé, said: “Everyone is quick to snap up an upgrade, but in the past we would have expected to have seen holidaymakers jump at the chance of a flight upgrade to First Class.

“It seems that as budget airlines are making flying increasingly affordable for all, the flight is now seen as just a means to an end with more and more Brits looking to live in the lap of luxury for longer than just a flight.”

Women would ditch their man for a flight upgrade was last modified: June 26th, 2019 by Oonagh Shiel

Festival at Sea – The S.S. Coachella (yes, that Coachella!)

Top 5 nude beaches around the world