Anyone who’s been to Walt Disney World Florida knows that a visit there is akin to hurtling off-planet and crash-landing in another world. The colours are brighter, the smiles wider, the sun warmer – and the people are of a different breed altogether.

With that in mind, here’s a handy who is who of theme park regulars. Keep the checklist, rack up some U-spy points and see which of the 7 categories you end up falling into. Because after a week of basically living in Walt Disney World, you might just find yourself emerging slightly battered, manically grinning – and with a pair of Mickey ears firmly in place.

Search for flights to Orlando

1. The pre-teens in pushchairs 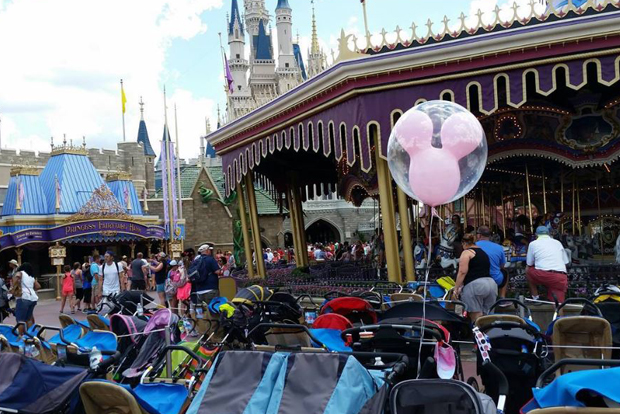 Identification: You’ll usually spot the parents first – they’ll have sweat sluicing off them in sheets from pushing their ten-year-old around in the Florida heat. Then your eyes will inevitably be drawn down, to the five-foot child with two perfectly functioning legs that has wedged itself in to a toddler’s pushchair.
Habitat: The Disney parks that require more walking than queuing, so Animal Kingdom, Epcot and Hollywood Studios.
Diet: The children’s menu. Teenagers in pushchairs require very little energy, as they’ve completely forgotten how to use their legs.
Dangers: Getting your foot run over by a seven-stone buggy that’s out of control because it’s not designed for people over the age of four.
U-spy points: 2. Pre-teens in pushchairs are a worryingly common occurrence in Walt Disney World.

2. The pint-sized princesses (and princes)

Identification: Once upon a time, children would sell their souls for Belle, Cinderella and Snow White dresses. These days, however, you can’t walk down Main Street U.S.A. without tripping over at least 500 Elsas and Annas. And…I’d love to stay cynical about this, but that level of mass glee is kind of infectious.
Habitat: Magic Kingdom, gawking up at Cinderella’s Castle. Or in the Bibbidi Bobbidi Boutique having a 200-dollar makeover.
Diet: The infamous Dole Whip frozen dessert. One needs to keep cool under all those layers of taffeta.
Dangers: Losing your child in the sea of princesses dressed as Elsa.
U-spy points: 1 for a Frozen princess. 2 for other Disney princesses. 5 for a Disney prince – an endangered species indeed.

Identification: A deck of park maps in hand, a smartphone stocked with Disney apps, walk-talkies, matching t-shirts – they’ve got it all. If you’re struggling for a solid identification, look at the wrist. That’s not a prison tag, but a personalised MagicBand that doubles as a park entrance ticket, hotel room key and credit card. They’re just that organised.
Habitat: The serious planners have mastered the art of booking ahead, so you’re guaranteed to see them smugly skipping the restaurant and ride queues while you watch on bitterly.
Diet: All the good stuff, because the serious planners booked seats at the Be Our Guest restaurant roughly three years in advance.
Dangers: Their eyes will be on either the map or their watch, so getting run over is a real and present danger.
U-spy points: 5. They move like the wind, so keep your wits about you if you want to spot a why-so-serious planner.

Identification: Usually found touting a retro look – Ariel-red hair done up in victory rolls, Rosie the Riveter headscarf and swing dress. Look closely (without being weird), and there’ll be a nod to Disney somewhere in the outfit, like Cheshire Cat striped tights or Mickey Mouse Converses.
Habitat: Striking a pin-up pose in front of The Haunted Mansion. Stocking up on The Nightmare Before Christmas memorabilia in gift shops.
Diet: Anything with a throwback theme. So that’s Oreo shakes from the Sci-fi Dine-in Theatre and fried chicken from the 50’s Prime Time Café.
Dangers: Being consumed by envy, because quite frankly the Florida sun makes you resemble a lobster in a baseball cap.
U-spy points: 4. Sometimes superfans are so subtle about their affection for Disney that only fellow fans will recognise the regalia – think Tangled replica wedding rings or a cameo necklace of Princess Tiana.

Identification: Twenty-somethings with rose-gold smartphones surgically attached to their hands. They’ll also be crowned with Mickey or Minnie Mouse ears. Not a regular pair, mind you, but a limited edition Ursula extravaganza or vintage Dumbo-print ears.
Habitat: They’re everywhere. Like a plague.
Diet: Somewhere photogenic like the Coral Reef restaurant in Epcot, so that they can snap a #mickeyears shot with a double-tap-worthy backdrop.
Dangers: Getting your eye taken out by a stray selfie-stick.
You-spy points: 0. Don’t encourage them.

Identification: The Star Wars fans are an ever evolving species, as they only migrated to Florida when Disney bought Lucasfilm in 2012. You’ll get the too-cool-for-school fans trying to play down their love by donning a t-shirt printed with a technical drawing of an AT-AT walker. Then you’ll see the utterly unapologetic fans – the ones with Darth Maul faces, toting miffed children enclosed in perfectly spherical BB-8 onesies.
Habitat: Hollywood Studios, watching the Symphony in the Stars fireworks show in reverent silence.
Diet: Anything from the Backlot Express in Hollywood Studios, thanks to its strategic spot by Star Tours and the Tatooine Traders gift shop.
Dangers: Queuing for 90 minutes for the classic Star Tours ride. There never used to be this many Star Wars fans in the world.
U-spy points: 1 in Hollywood Studios, the spiritual home of Disney Star Wars fans. 3 in other Disney parks.

Identification: Disney World wedding parties are dead easy to spot, thanks to their habit of migrating en masse. Excitingly, there are a few varieties to spy. You’ll know the hen and stag parties by their matching attire – Minnie ears, perhaps, or t-shirts with the happy couples’ names on them. The actual wedding day, however, will see a flock of smartly dressed people striding around, paced by a roving troupe of photographers.
Habitat: Swishing around the super posh Grand Floridian hotel. Or in Epcot, where couples can get married all over the world. Happily, wedding parties have to go through invasive security just like the rest of us, so you might be lucky enough to catch them floundering at the park gates, watching in dismay as a guard rifles through their perfectly packed clutch purses.
Diet: Hen dos take on high tea at the Garden View Tearoom. Stag parties, meanwhile, are usually found tipping back a Guinness at Raglan Road, which – in true all-or-nothing Disney World style – stars a couple of 130-year-old bars shipped over from Ireland.
Dangers: Being inadvertently whisked up with the wedding flock and trying fruitlessly to fight your way out. Advice: keep a firm hold of your companions when nearing wedding parties.
U-spy points: 2. Disney hosts over 1200 weddings a year, so spend a few days there and you’re bound to see them.

Thinking about going to Orlando? Start your holiday with Cheapflights where you can book flights, hotels and car hire in one place.