Mention Costa del Sol holidays and Malaga city isn’t always the first destination that springs to mind. You’d probably think of Fuengirola or Marbella long beforehand. Which is odd really, as its combination of over 30 museums, excellent shopping and gourmet foodie treats make it an ideal destination to combine sea and sightseeing. Throw in an ideal beach-going climate with over 320 days of sunshine a year (those come guaranteed, by the way) and city-break destinations don’t come much better.

So, if you’re looking for some late-season sunshine, or planning ahead for next year, maybe it’s time you considered Spain’s sixth-largest city. Search for flights on Cheapflights.co.uk and then decide which of these Malaga beaches to make your base camp for soaking up that Andalusian sunshine…

Search for flights to Malaga

La Malagueta truly lies on the city’s doorstep. Its 1 kilometre of sand runs from the port – perfect for close-up views of the cruise ships – to La Caleta beach in the east. There’s no need to pack a picnic because several good venues serving fresh fish and seafood line the beach. You can’t go wrong at most of them, but for good-value try Chiringuito La Farola near the lighthouse or for a more upmarket experience, visit Chiringuito La Tropicana further along.

The beach doubles as a concert arena during Malaga Fair. It also provides one of the best viewing points for the firework displays on the night of San Juan (23rd June) and the opening of Malaga Fair (mid-August).

Get there: It’s a 1.2-kilometres walk from Plaza de la Marina – just a stone’s throw from the city centre’s main promenade – that will take you less than half an hour.

The biggest beach in Malaga sits southwest of the city centre. Once home to Malaga’s industrial centre – spot the three tall chimneys – the sands on La Misericordia run for 2 kilometres from the port to the Guadalhorce River. It rivals La Malagueta for busyness too as it’s a big favourite with local families. Finding a spot for your towel in July and August can be mission impossible, but outside high season you’ll have more than enough room to spread out.

And as for lunch, you’ll find a good choice of cafés, bars and pizza places along the seafront promenade. For quality fish and seafood, Gutiérrez Playa serves some of the finest in Malaga. For a cheaper bill, try Merendero Casa José at the eastern end or Merendero Ginés in the west, where tables sit on the sand.

Get there: If you’re feeling energetic, the 3.5-kilometre walk or cycle ride from Plaza de la Marina to the tallest chimney gives you a great overview of the beach. Or, take the 16 bus from the Alameda Principal and get off at La Tabacalera and walk a block to the beach. 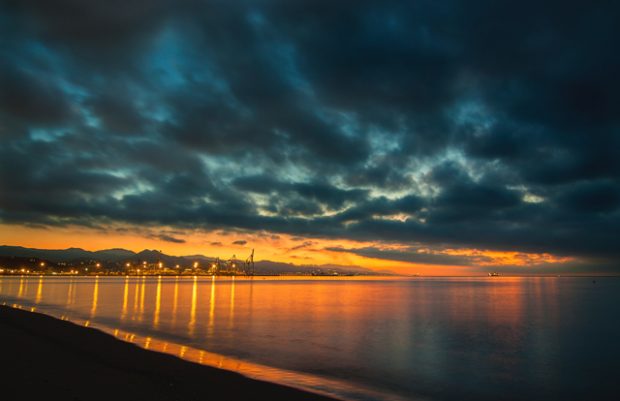 A continuation of La Malagueta, La Caleta sands stretch 1 kilometre east to the 19th-century bathing pavilion, Los Baños del Carmen. This beach is a favourite with families and tourists looking for a little bit more towel space. Like La Malagueta beach, this one’s walkable too.

You’re not as spoilt for choice for lunch here – there are just a few beach restaurants – so a picnic is your best bet. Stock up on Malaga produce – cold cuts, olives, fresh salad and vegetables – at Atarazanas Market in the city centre before you head for the beach. But do treat yourself to a little something at Los Baños del Carmen where you can watch the sunset over the city as you sip your cocktail next to the waves.

Get there: The 2-kilometres stroll from the city centre along the seafront promenade won’t take you more than half an hour. If you don’t fancy the walk, buses 3, 11, 34 and 35 will get you there quickly. 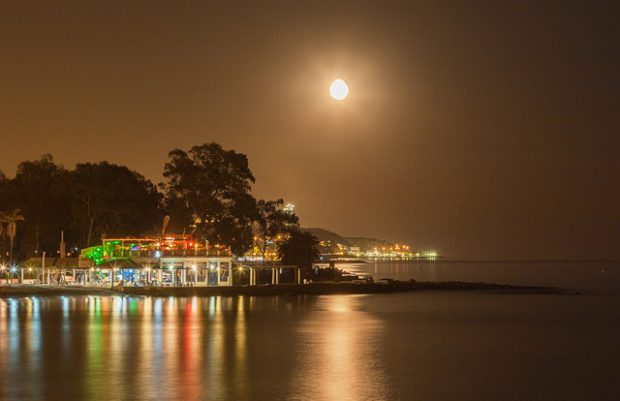 You can’t get further east than this beach in Malaga, much-loved by locals for its rocky outcrop, unique on the city’s coastline. The rock, which does look like the raven it gets its name from if you use your imagination and squint hard, divides the small beach neatly into two sections. One faces east and has better views, and the other looks west.

You’ll need to take your own food and drinks to this one as there are no beach bars. Early morning’s the best time of day, so pack some breakfast and arrive first thing to watch the sun rise over the Mediterranean.

Get there: El Peñón del Cuervo lies 8.5 kilometres outside the city centre so it’s best to get the bus or cycle there. Take the Vélez-Málaga bus from the bus station in the city centre (next to the Ferris Wheel) and get off at the second stop. Double-back on yourself and walk east to the beach. If you’re on two wheels, ride along the seafront promenade until you reach El Candado Marina where you follow the road before rejoining the cycle lane until the beach. Take in all the eastern Malaga beaches as you go and reward yourself with amazing views of Malaga bay on the way back.

To the west of the city centre, two beaches lie on the 4-kilometre stretch between La Misericordia Beach and Torremolinos, both much quieter than the Malaga city beaches. Despite being sandwiched between the city suburbs and Malaga Airport, Guadalhorce Beach is one of the quietest and most unspoilt beaches on the Costa del Sol. It fronts a protected nature reserve and is full of lagoons that are home to an impressive list of birds. Top of the must-see list are the flamingo, osprey and Malaga’s star feathered resident, the endangered white-headed duck.

It’s also the only beach in Malaga where you’ll come across nudists and an almost permanent undertow so this isn’t the most family-friendly beach. There are no facilities either, so pack your own food and drink plus some decent binoculars if you plan a spot of twitching.

Get there: To reach Guadalhorce Beach, you can walk from La Misericordia Beach if the two river tributaries are shallow enough. If the waters are high (and they usually are between October and April) or you don’t fancy the walk, take the number 5 bus from Plaza de la Marina to Guadalmar. Walk east following signs to the ‘parque natural’ and the beach. 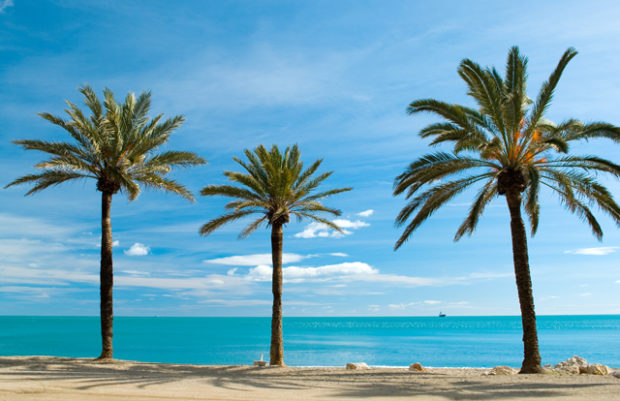 In the old fishing villages of Pedregalejo and El Palo, you’ll find the most happening beachfront area in the city – the bars and restaurants practically spill onto the sand. Pedregalejo and El Palo beaches are made up of a succession of little manmade coves. Head here on an off-season weekday and you could almost have a cove to yourself. They’re home to the city’s jábega boat fleets that are dotted along the beaches. These traditional crafts date back to Phoenician times and although they’re no longer used for fishing, they’re rowed by local teams in regattas.

For a Malaga-like-a-local experience, go for a classic lunchtime aperitif: a skewer of freshly grilled sardines (known as an espeto) washed down with an ice-cold Victoria, the local beer. All for less than €5 for two. Or visit El Tintero at the far eastern end of El Palo, something of a legend among Costa del Sol food haunts. At this loud and bustling beachfront venue, you don’t order from a menu but take your pick from the waiters who shout out what fish and seafood is on offer.

Get there: Both of these beaches in Malaga are easy to cycle to – it’s flat all the way and along the pedestrian prom. 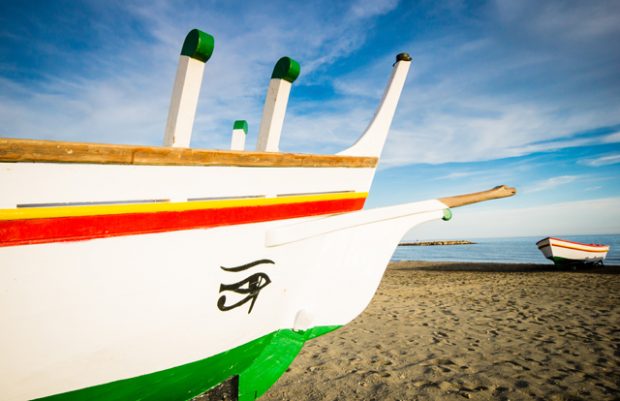 The Campo de Golf beach doesn’t quite match Guadalmar for lack of crowds but it’s still one of the least visited beaches in Malaga. Named after the next-door 18-hole golf course – built in 1925 and the oldest on the Costa del Sol – this long strip of sand is a good bet if you want room to spread out in the summer.

It’s one of the Costa del Sol’s hotspots for kite surfing and you can usually see a crowd scudding the waves and skyline. If you fancy joining them, equipment hire is available on the beach.

Get there: This beach is best reached by bus. Take the number 5 from the city centre and get off at the Campo de Golf stop. From here, it’s a 10-minute walk to the beach.

Bajondillo beach isn’t strictly part of Malaga, but it is a logical sidestep if you’re in the west of the city. Stretching about 1 kilometre along the coastline, these sands belong to “Torre, Torre, Torremolinos”, where Costa del Sol mass tourism began back in the late 1950s. 60 years later, the masses are still here but don’t let that bother you as you chill on a sun lounger or Balinese bed (from €8 a day).

There’s no shortage of beach restaurants and bars here. Your must-try dish is pescaíto frito – Torremolinos is famed throughout Spain for its fried fish and even has a special day to honour it in June every year. Eat your plate of deep-fried anchovies, baby squid, red snapper et al, washed down with an ice-cold tinto de verano (red wine and lemonade).

Get there:  This beach is easy to get to from Malaga. You can walk from the golf course (see above) or take the train from Malaga city centre. Get off at Torremolinos main station and walk 10 minutes to the beach. 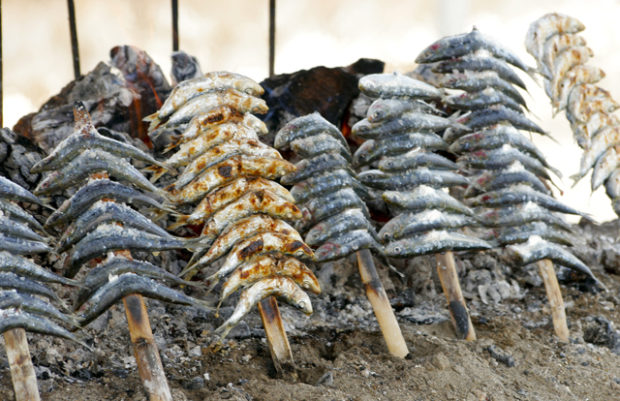 In need of some Vitamin Sea? Then head on over to Cheapflights.co.uk and get searching for those bargain flights to Malaga…