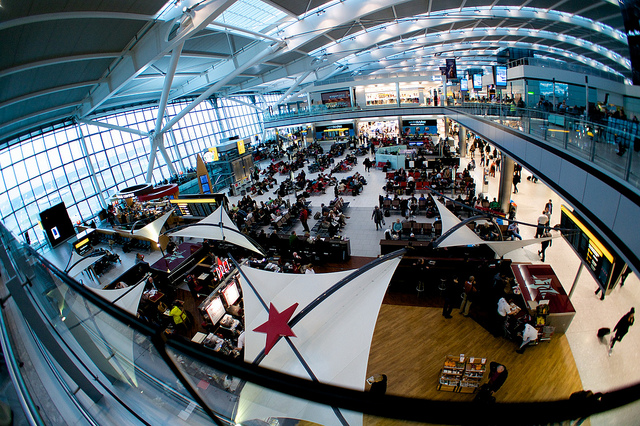 London Heathrow Airport is the busiest airport in the UK, and the fourth-busiest in the world, in terms of passenger traffic. However, Heathrow has the distinction of handling more international passengers than any other airport in the world – a testament to its importance as a transit-point for intercontinental travel.

Flights to Heathrow Airport are provided by an incredible 90 airlines, serving 180 destinations worldwide. Heathrow is home-base for British Airways, which operate direct and indirect flights to basically every major city you can think of, from Heathrow’s beautiful, new Terminal 5 building.

London certainly has an appropriate gateway in Heathrow Airport: a highly modern, convenient hub that is truly geared toward providing the best possible experience to travellers. There are plenty of easy, hassle-free transport options available to travellers looking to get downtown. The flocks of tourists, who are no doubt going to descend on London for the 2012 Olympic Games, can look forward to a warm welcome and efficient service.

Most Popular Airlines in Each Terminal

Terminal 1 closed on 29 June 2015 to allow the second stage of Terminal 2’s expansion, before of its closure all remaining flights were moved to other terminals.

Terminal 2 deals mainly with flights to European destinations though there are also a few long-haul flights.

Airlines currently based at Terminal 2 are:

Terminal 3 operates mostly long-haul flights to US, South America and Asia, although some are to European destinations.

Check-in and flight arrivals are both located on the ground floor at the front of the building. Departures are above check-in on the first floor.

Airlines currently based at Terminal 3 are:

Flights operating from Terminal 4 are mainly for long-haul and European destinations.

Airlines currently based at Terminal 4 are:

Terminal 5 is the newest of Heathrow’s terminals. Check-in and departures is on level 3 above the interchange plaza.

Terminal 5 is used exclusively by British Airways and Iberia.

Fast, free and convenient transfers are available between all Heathrow’s terminals:

To and From the Airport

Heathrow lies about 24km (15 miles) west of London and can be accessed by all major forms of public transport:

Heathrow Express: Is the quickest link between Heathrow and central London. This non-stop service runs to and from London’s Paddington station every 15 minutes and the journey takes just 15 minutes (21 minutes to Terminal 5).

Tickets can be purchased online, at the station or on the train. The Express Standard class single fare is £27 on board or £22 online.

London Underground: The Piccadilly Line tube is the most cost-effective rail route between Heathrow and London. The  Journey takes 50 minutes and trains run every ten minutes even during off-peak times.

All stations are in Travelcard Zone 6.

For more information regarding timetables and ticket prices visit the  Transport for London website.

Bus and Coach: A number of bus companies run a service to various parts of the UK, including Victoria Coach Station in central London. The frequency is not as good as the London Underground or the Heathrow Express, however, ticket prices are lower. Expect to pay around £6 for a one-way adult ticket. For more information visit National Express here.

Uber: Flat-rate fares are no longer available to Uber customers travelling to London airports including Heathrow. Until recently the company offered a series of set fares trips to London airports but Uber  now calculates fares based on time and distance rates.  Expect to pay approximately £35 for a 44 minute journey using Uber X to central London in good traffic conditions.

Taxis: London taxis are available outside each terminal. The cost to central London is £45 – £70 and the journey time is approximately one hour. Minicabs can also be ordered in advance.

Check-in at Heathrow should take you around 30 minutes.

If departing from Terminal 5, you’ll need to collect a boarding pass from a self-serve kiosk and hand in your bags at a Bag Drop desk.

You’ll find your check-in zone listed on the information screens near the departures entrance:

Liquids may only be carried in containers holding 100ml or less. They must be carried separately in a single plastic bag which is:

Liquids in containers over 100ml will not be permitted through security. You will need to pack them in your hold baggage instead.

If you are travelling with a baby or infant, an exception to the above rule will apply, but you can carry only what the liquids you will need for your journey and are asked not to carry the milk in a flask.

The same applies to liquid medication – you can only carry what you need during the course of your flight.

All medication should be accompanied by documentary proof of authenticity, such as a prescription or letter from a doctor confirming that you need them for your journey.

Liquid medication that is not required on the flight should be carried as hold luggage.

If you have a new biometric ‘chipped’ passport, you can use the automated ePassport gates instead of having your passport checked by a Border Force officer. This means you can avoid the queues and get through passport control more quickly.

You can use the gates if you are a passport holder of a country in the European Economic Area (EEA) – including the UK – or Switzerland; and if you have the EEA chip logo on your passport.

You cannot use the gates with a national identity card. Iceland, Liechtenstein and Norway are not members of the European Union (EU) but citizens of these countries have the same rights to enter, live in and work in the United Kingdom as EU citizens

Free Wi-Fi is available throughout the terminal for the duration of your stay at Heathrow.

It is also possible to become a Premium Tier member as part of the Heathrow Rewards loyalty program to receive 5-times faster Wi-Fi.

Pay-as-you-go computer desks are available in every terminal.

Free Power Pole charging stations are available in all terminals, before and after security. They are compatible with UK and European plugs, and with USB cables.

Heathrow offers an extensive array of cafés and bars. Click here for a full list of service offerings and their prices.

Airport lounges are open from 05:00 – 23:00 daily. The lounges are located in Terminal 2, 3 and 4. Here you can enjoy complimentary drinks, snacks, newspapers and magazines. Lounges also include:

Recommended is Plaza Premium Lounge: Located in Terminal 2A, Level 4 air-side is open 5:00AM – 11:00PM (Daily). Pay at the door lounge access starts at £35 for 2 hours. Showers and private relaxation rooms with beds are available at an extra charge.

Heathrow offers free Stay & Play areas with slides, soft play areas and separate baby and junior zones. The areas are suitable for children aged up to nine years old, who must be accompanied by an adult. The areas are open from 06:00 to 21:00 every day.

Heathrow is a smoke-free airport, although smoking is permitted in designated areas outside the terminal building. Passengers are permitted to use electronic cigarettes within the premises, but not beyond the gate area.

There are multi-faith prayer rooms in each terminal at Heathrow, with representatives from Christian, Buddhist, Hindu, Jewish, Muslim and Sikh faiths. To speak to a representative, call +44 (0)20 8745 4261 or email at chapel@heathrow.com.

Some airlines like Virgin Atlantic offer their customers spas and facials as part of bespoke service offerings. There are also parlours and stores where body and nail treatments can be purchased in the various terminals.

An A to Z listing of duty free shops can be found here.

Sleeping pods can be found in Terminal 4 courtesy of Yotel.

Provided throughout Heathrow, in arrivals and departures, both before and after security. Most include a unisex, wheelchair-accessible toilet. Occasionally the accessible toilet is located inside the men’s and ladies’ toilets. Parents travelling with children of the opposite sex are welcome to use the unisex accessible toilets.

Free showers are available in Terminal 4 near the Heathrow Express Station, a towel pack (including shower cap, shampoo and shower gel) is available for a small charge.

Showers are also available at a cost in the No.1 Traveller Lounge in Terminal 3 departures (after security).

If you have a disability or mobility difficulties, you will need to inform your airline, tour operator or travel agent of your particular need at the time of booking, or at least 48 hours before your travel.

There are special assistance areas within the terminals located at the following areas:

Porterage can be arranged for you free of charge for reasonable amounts of luggage.

Heathrow has medical facilities in the event that you need any kind of treatment, with emergency phones located throughout the terminals. If emergency medical treatment is required, use one of the internal telephones in the terminal and call 222. An operator will able to send an ambulance or medical team to the correct location.

If you lose an item in the airport, you can search for your missing property at missingx.com, or check the lost property offices in Terminals 3 and 5.

All items handed in are entered into the database, although it can take between 24 and 48 hours for a found item to be registered. All items are retained for three months. If you find your property on the database, use the online contact form to start the matching process. If the property is yours, Heathrow will give you a code which you will need to enter at mailmyproperty.com and pay the reclamation fee. Charges range from nothing to £20 for each item. Add postage and packing if you want the item to be posted to you.

Baggage trolleys are available for free in all terminals. These can be taken to the car park, bus station or rail station access points. Trolleys are also provided on the departures concourse. Please note that they can’t be taken through security control, however.

There are a number of hotels linked directly to the terminals at Heathrow as well as a variety of other located close to the airport.

A stunning new sculpture weighing 77 tonnes and measuring 78 metres will be the first (and last) impression of the...
Oonagh Shiel

A quick and tasty guide to food at Heathrow Airport

CheapflightsAirport GuidesAirport Guide to Heathrow (LHR)
We use technical, analytical and marketing cookies to help you with things like logging in and picking up your search where you left off.