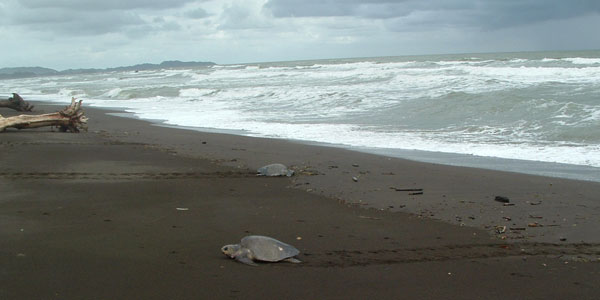 If you’re lucky enough to be on one of two Costa Rican beaches during the weeklong period of arribada, then you’re bound to see one of the greatest sites this beautiful country boasts, writes Kelly Reid. And in an Edenic tropical paradise like Costa Rica, that’s saying something. Arribada, a monthly pilgrimage to the sandy shores made by up to 10,000 female sea turtles, is one of nature’s most enchanting rituals.

Of course, such a miraculous exodus from the sea is no easy feat, especially when street dogs and vultures lurk nearby to snatch whatever eggs might be pillaged from their relatively shallow sandy beds. Fortunately, Tropical Adventures Foundation provides those keen on preserving turtle posterity with a unique opportunity: volunteer for as long as you like in the charming coastal town of Ostional, where you can help give the sea turtles a fighting chance to survive until they reach the surf.

On the bus ride from vibrant San Jose, volunteers will first see the impressive mountains of the Nicoya peninsula as they pass into the Guanacaste province and head for the coast. The cries of howler monkeys – aptly named creatures, to be sure – often echo across the hills and observant visitors are bound to see a howler or two in the trees above. Once in Ostional, colourful hibiscus flowers decorate the edges of the enormous beach. Volunteers live in dorm-style cabins and enjoy meals such a gallo pinto, a traditional Costa Rican breakfast of rice and beans, and kitchen staff have an ever-present supply of sweet tamarindo juice for the thirsty turtle enthusiast.

But the real fun starts on the beach. Each evening, thousands of turtles climb up on to the sand to lay as many as 150 eggs. Meanwhile, volunteers, armed with special red flashlights that do not disturb the mother turtles, patrol the coast to keep the natural predators at bay and make sure turtle nests are well protected. Each turtle is measured, tagged, and the number of eggs counted by the volunteers. Truly, to witness such natural instinct is impressive: the turtles remember the scent of the beach at which they were born and return some 15 years later to lay eggs of their own. Even better, those who wish to rise early about 42 days later will see the hatchlings head for the ocean just as dawn breaks on the coast. And don’t be surprised if you’re still around at the quarter moon 15 years later to see them come back – Costa Rica is so enchanting that you may just never leave.

CheapflightsBeach & NatureSea Turtle sojourns in Costa Rica
We use technical, analytical and marketing cookies to help you with things like logging in and picking up your search where you left off.