Twice a year, in late March and September, a rather special solar phenomena takes place – the equinox.

On the equinox our planet’s equator passes the centre of the sun at just the right angle to ensure day and night are the same lengths. Fancy, huh?!

To mark this marvelous astrological occasion, we’ve found 10 places around the world where our ancestors paid homage to our very own special star and where the sun aligns to magical effect…

Built by Ramses II between 1279 and 1213 BC to mark his victory in Nubia, the two giant stone temples at Abu Simbel stand as an impressive monument to the King and his Queen Nefertari.

Despite being raised 984 ft from it’s original setting to for construction of the Aswan High Dam in the 1960s, every year on February 21 (the king’s birthday) and October 22 (the date of his coronation) the sun shines directly onto the Holiest of Holies – the statues of three gods and King Ramses II – within the Great Temple.

The origins of Stonehenge’s famed stone circle may be up for debate – how was it built, why was it built, is it a primitive calendar, a site for ceremony, or something more otherworldly– but what isn’t for debate, however, is the magic of watching the sunrise over the ancient monument surrounded by hundreds of pilgrims and curious onlookers alike.

This megalithic creation was built in three stages from around 2950 to 1600BC. The site holds special spiritual significance for Pagans and Druids especially during the summer and winter solstice and autumn and spring equinoxes. The most visually impressive time to visit is on the longest day of the year (the summer solstice) when the sun rises up behind the ‘Heel Stone’ – one of the main stones, giving the illusion that the sun is actually resting on the stone.

Not only a scientific wonder, but a true work of art, Jantar Mantar is a collection of giant instruments that together calculate a variety of astronomical occurrences.

Built in the 18th century by astronomy-loving King Maharaja Jai Singh II of Jaipur, Jantar Mantar is covered in a series of brick and marble towers that cast shadows that can be used to tell time and the phases of the moon, stars and planets.

One of the biggest stone circles in Britain, the Ring of Brodgar is found on Orkney, a collection of picturesque islands off Scotland’s northern coast.

While Brodgar’s origins are largely unknown, it is believed to have been built sometime between 3000-2000BC. The 300 foot circle originally consisted of 60 stones that varied in height from 6 to 13 feet, but today only 27 of the stones remain.

In the 19th century, Brodgar was dubbed the “Temple of the Sun” after several alignments with the sun were observed around the solstices and equinoxes. On the solstice, sunrise and sunset align with the stones and the nearby hills, while during equinox the sun set just beside the westernmost stone.

Not far from the popular sun seeker hotspots of the Yucatan Peninsula lies the ruins of the great Mayan city of Chichen Itza.

Dominating the ancient site is the Temple of Kukulkan – known to locals as El Castillo – a large step pyramid dedicated to the feathered serpent god, Kukulkan.

During the equinox, the 79 foot high pyramid comes to life as the setting sun creates a shadow on the northern stairway that gives the effect of Kukulkan slithering down the temple.

Lying between present-day Utah and Colorado, Hovenweep National Monument is known for its collection of 12-13th century Puebloan (Anasazi) ruins.

The structure that is of most interest this time of year is the Hovenweep Castle – a giant solar calendar. Built slightly later than the other structures on the site, the Castle is aligned in just the right way that during solstice and equinox light streams in through small openings in the walls at sunset hitting specific points above the interior doorways indicating the time of year.

Built in the 15th century at the height of the Inca Empire, Machu Picchu was only inhabited for 100 years before the Spanish Conquest wiped out the local population – though no one knows for certain how this happened.

The site was largely forgotten to the outside world, until the early 20th century when historian Hiram Bingham announced its discovery to the world.

Many elements of Machu Picchu were dedicated to the Inca sun god (Inti) – their most important deity.

The Intihuatana (“hitching post of the sun”) is one of many ritual stones found throughout South America. The Intihuatana is believed to have been used as an astronomic clock and calendar by the Incas.

At midday on November 11 and January 30 the sun sits above the stone casting no shadow at all, on the winter solstice the stone points directly at the sun and casts a long shadow on its southern side, then on the summer solstice a much shorter shadow is cast on its northern side.

Over 880 statues (moai) are found on isolated Easter Island, 2,300 miles from the coast of Chile. Ranging in size from a few feet tall to over 30 feet and weighing up to 150 tons, the iconic Easter Island Heads were carved by the native Rapa Nui people from hard volcanic rock sometime after they first landed on the island in 300AD.

Thought to honour the islanders’ god Make Make or important chiefs, the majority of the Moai are found around the beaches and face inland. However, the seven Moai at Ahu Akivi are a little different. Built around 1460AD, each measuring 14 feet tall and weighing 12 tons, they face the point where the sun sets during the equinox.

It started life as a Hindu monument before transforming into a Buddhist temple, but Angkor Wat isn’t your average place of worship.

The largest religious monument in the world, Angkor Wat holds such an important place in Cambodian culture that its likeness is featured on the country’s flag.

The architects of Angkor Wat looked to recreate the cosmic order of the universe in their design and as a result several solar alignments occur with nearby temples and shrines.

During winter solstice, if you stand at Pre Rup Temple you can watch the sun set directly over Angkor Wat. While over at the ancient city of Angkor Thom, on the summer equinox the sun rises over the Temple’s eastern gate.

This quiet market town in the English county of Staffordshire is home to a rather unique phenomenon – a double sunset.

Every year around the summer solstice, the sun sets twice in the same evening.

The first sunset occurs when the sun disappears behind the summit of The Cloud (a millstone grit hill) then reappears on the Cloud’s northern slope before setting for a second and final time at the bottom of the hill.

There are plenty of places around town where you can catch a glimpse this unique sight – just ask the locals for their favourite spots. 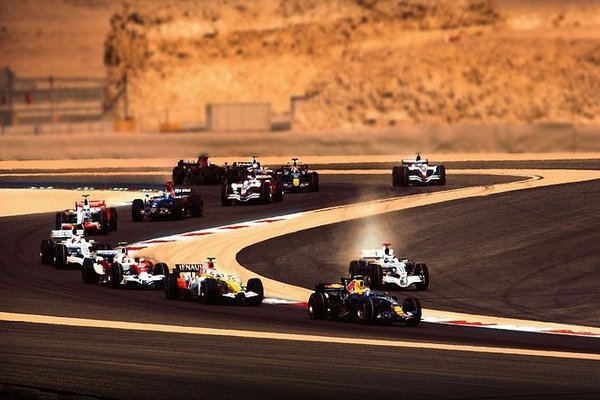 Countdown to the Bahrain Grand Prix – where should you visit?