Flights to Niagara Falls in 2022

Can I fly to Niagara Falls from USA right now?

Most visitors from USA need to provide a negative COVID-19 test result and/or quarantine to enter Niagara Falls.

Quarantine requirements
Visitors from USA are not required to quarantine after entering Niagara Falls.


Can I fly back to USA from Niagara Falls?

Returning to USA from Niagara Falls

Quarantine requirements
Visitors from Niagara Falls are not required to quarantine after entering USA.

Which day is cheapest to fly to Niagara Falls?

The cheapest day to fly to Niagara Falls is usually Sunday. At the moment, Thursday is the most expensive.

What time of day is cheapest to fly to Niagara Falls?

To get the best value, try booking a flight in the evening when visiting Niagara Falls. Generally the prices will increase for flights at midday as these tend to have higher demand.

Niagara Falls, Ontario, lies across the river from Niagara Falls, New York. Two cities, one name, but regardless of which country they are in, the main attraction is the Niagara Falls and these falls can best be seen from the Canadian side of the river.

The Falls is composed of two major sections that are separated by Goat Island. Horseshoe Falls is on the Canadian side of the border and American Falls is on the U.S. side. Bridal Veil Falls is also on the American side, but is separated from the main falls by Luna Island. Every second during summer daylight hours, more than 2,800 cubic metres of water crashes over the rim at a break-neck 40 mile (65km) per hour.

It’s a favoured place to get married, a tradition dating back, it is said, to 1801. Loved-up couples start off married life with, perhaps, a tour of the falls in the Maid Of The Mist. Then, with families, they return on flights to Niagara Falls to take in the falls and perhaps the beautiful wine country that lies around the charmingly named Niagara-on-the-Lake.

There are moderate temperatures in this part of Canada. The mists make temperatures seem slightly cooler. Spring and fall temperatures are in the teens Celsius, summer sees highs of 30 degrees and winter temperatures hover around zero.

When is the best time to fly to Niagara Falls?

There’s no bad time to take trips to Niagara Falls. Spring and fall are mild, summer sunny and winter cold and frosty, although not as harsh as in other parts of Canada.

Peak Season:
Summer is high season. The city hosts several outdoor festivals during these months and the parklands are in full bloom.

Shoulder Season:Spring and fall are good times to visit Niagara Falls. The crowds are not as intense and temperatures are moderate.

Off Season:The winter months are, in general, low season. However, this is when the spectacular Winter Festival of Lights is staged. It’s Canada’s biggest light festival.

Getting around Niagara Falls

Most of Niagara Falls’ sights are centred around the falls.  From mid-April through October you can hop aboard the Niagara Parks People Mover to get around. The People Mover runs from Table Rock at the Horseshoe Falls to Queenston Heights Park and stops at all the local attractions. To get outside of the area, renting a car is your best option.

What airport do you fly into for flights to Niagara Falls?

See alternative destinations where airfare is generally forecast to be close to Niagara Falls flight prices. 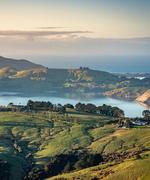 Find the best Niagara Falls flight deals for you

Cheap tickets to Niagara Falls found by our users in United Kingdom as recently as January 22, 2022.

Other local departures to Niagara Falls from United Kingdom