Flights to Sacramento in 2022

Cheap flights to Sacramento in May, June 2022

The best prices found for SMF flights for May, June

Cheap flights to Sacramento found for this year

Late deals on return flights to Sacramento, departing today and this week

Can I fly to Sacramento Intl from United Kingdom right now?

Most visitors from United Kingdom need to provide a negative COVID-19 test result and/or quarantine to enter Sacramento Intl.

Quarantine requirements
Visitors from United Kingdom are not required to quarantine after entering Sacramento Intl.


Can I fly back to United Kingdom from Sacramento Intl?

Quarantine requirements
Visitors from Sacramento Intl are not required to quarantine after entering United Kingdom.

What is the cheapest month to fly to Sacramento?

The cheapest ticket to Sacramento found for each month in 2022 based on historical flight searches by Cheapflights users.

When is the best time to fly to Sacramento Intl Airport?

Average San Francisco flight ticket prices and weather conditions for 2022 and 2023 by month.

Peak Season:
With weather not playing a factor in determining the best time for travellers to take flights to Sacramento, peak season is determined by the local events calendar. As such, the most popular time to visit is August and September when the California State Fair arrives at the California Exposition fairgrounds. This annual event has been taking place for more than 150 years and features exhibits, petting zoos, carnival games and live shows.

Off Season:
The Sacramento winter, or what passes for it with average temperatures in December and January dropping to a not-exactly-freezing 12 degrees Celsius, constitutes the off-season, though the place is far from inhospitable at this time and is a great time to search for cheap flights to Sacramento. Although it may be considered the off season to fly to Sacramento, events such as the free New Year’s Eve celebration is sure to keep visitors entertained. The event lights up the skies above Old Sacramento and features fun activities for the whole family to enjoy such as live music, dinner specials, drinks and an array of entertainment.

When is the best time to book a flight to Sacramento?

The price you pay for your flight to Sacramento may vary depending on when you book. For the best chance of a lower fare, look to book 61 days in advance of your trip. Fares are likely to increase a fortnight or so before your departure date.

Which day is cheapest to fly to Sacramento?

Wednesday is currently, on average, the cheapest day to fly to Sacramento. Flying on Sunday will result in higher flight prices.

What time of day is cheapest to fly to Sacramento?

To get the best value, try booking a flight in the evening when visiting Sacramento. Generally the prices will increase for flights in the afternoon as these tend to have higher demand.

Sacramento has moved on from its past as a pioneer town to a modern metropolis that celebrates its history but prefers its more up-to-date image. This new spruced up reality is in evidence with its City of Trees nickname but, more importantly, is rooted in the number of green spaces scattered about the city.

Sacramento is the capital of California and is among the ten fastest-growing areas in the U.S. Although its population is just less than 500,000, it is part of a greater region that encompasses more than two million inhabitants, though even that makes it merely the fourth largest in the state after Los Angeles, San Francisco and San Diego.

Within Old Sacramento everything is housed within vintage 19th-century buildings. Little more than a stone’s throw away, the American River cuts through the heart of the city and offers several outdoor leisure activities such as river rafting and fishing.

Regardless of whether it is the great outdoors or the history of the Gold Rush that draws you here, you will not be disappointed.

Despite its California location, Sacramento has a Mediterranean climate with mild winters and hot and dry summers. However, the summer heat is not accompanied by humidity, making it a lot easier to take and is a great time to book flights to Sacramento. The local rainy season falls between November and March.

Sacramento is a typical American city with an extensive road and freeway system connecting it to other cities, but unlike many other American cities it also has a widespread network of bicycle and pedestrian paths. Getting around by car is the most convenient, but the traffic can get very slow in the city centre. Rental car offices can be found at the airport and in the city centre. Local buses cover the city and surrounding areas with reliable, cheap service, but they can be slow. The light rail system connects the city to its surrounding suburbs.

Flights to Sacramento International Airport (SMF) will leave you with a short 10 mile (16km) journey to the centre of Sacramento. There are airport shuttle bus transfers readily available at the airport to whisk you off to the city. Alternatively, you can take a taxi or hop on the Yolobus which is an efficient and affordable way of reaching the city.

Southwest Airlines accounts for more than half the flights at Sacramento International; the low-cost pioneer carries about 4.6 million passengers each year. Flights to Sacramento International come in from destinations across the US such as Denver, Charlotte, Phoenix, San Francisco, Chicago, Salt Lake City, Atlanta, Detroit, Dallas, San Jose, Houston and Washington, as well as Guadalajara in Mexico.

This small, easy-to-use airport can nonetheless get overcrowded at peak times, so head for the check-in counters early as most shops, restaurants and other facilities are after security.

Sacramento is the state capital of California, founded at the confluence of two rivers, and has a long and interesting settler history. Be sure to check out the many museums during your stay.

What airport do you fly into for flights to Sacramento?

See alternative destinations where airfare is generally forecast to be close to Sacramento flight prices. 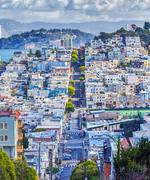 Find the best Sacramento flight deals for you

Cheap tickets to Sacramento found by our users in United Kingdom as recently as May 24, 2022.

Other local departures to Sacramento Intl from United Kingdom

Not set on Sacramento? See the cheapest flights to United Kingdom. Airfare prices updated on May 24, 2022.